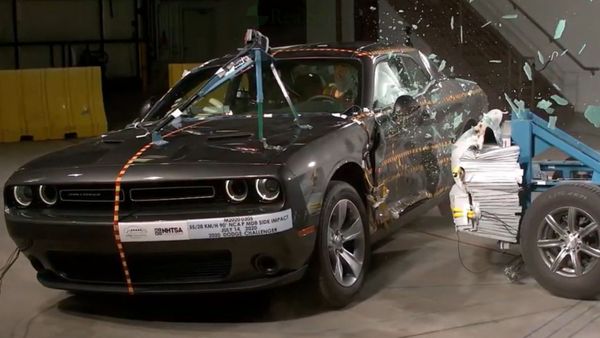 And do you care?

When shopping for a modern muscle car, the majority of buyers wouldn’t rank safety as the number one priority. We get that, because performance is a big draw, and so are looks. But, if that muscle car is your daily driver and you transport people you love in it, safety should still be a concern, even if it’s not at the top of the list. With that in mind, we decided to look at the safety ratings for the four muscle cars model lines sold in the United States today.

With Mopar muscle cars so hot these days, it’s interesting to see how the Dodge Challenger is ranked in crashworthiness by the Insurance Institute for Highway Safety. The coupe gets Good ratings for side and moderate overlap front tests, but the small overlap front driver’s side crash test result is Moderate. Better are the Acceptable ratings for the roof strength and head restraints/seats tests.

Looking a little closer at that small overlap crash test, the big hang-up was with the safety cage holding up. It was so bad the crash test dummy’s left foot was trapped in the wreckage. That’s not super encouraging, but we’re not sure most people aching to buy a Challenger care too much about the result.

We know some people have a problem with calling the modern Dodge Charger a muscle car because it has four doors. But we’re still including it in this list because we think it belongs. According to IIHS, the Charger actually gets high marks in all crash tests but one, and you probably already know what that is.

The small overlap front driver-side will probably remain a problematic test for the Dodge twins until the new platforms come out, so until then it’s a Marginal rating. The big risk in that kind of a crash is with the lower leg and foot. Crash test footage shows a 2015 Chrysler 300, which shares a platform with the Charger, and IIHS seems to feel they’re essentially the same when it comes to safety.

When it comes to the Chevrolet Camaro, IIHS doesn’t exactly give it flying colors, but all the crashworthiness tests are Good except for one Acceptable for roof strength. Of course, that only comes into play in a rollover collision, which everyone always hopes they won’t be involved in.

Finally, there’s the Ford Mustang, a muscle car that’s found popularity with a global fanbase. IIHS gives it Good ratings in all but the notorious small overlap front: driver-side test, where it scores an Acceptable. Unlike in the Challenger the dummy sustained minimal damage to its legs and feet, but the A-pillar and instrument panel were pushed quite a bit toward the driver, so that kind of a collision might not turn out so well for some in the real world.

If you plan to transport your kids in a modern muscle car, IIHS also rates the ease of use of the LATCH anchors. Parents know what a pain it can be to use those in certain cars, and if it’s difficult enough you might not get the child seat secured down as tightly as you should, putting your child in potential danger.

That being said, only the Dodge Charger received an Acceptable rating for LATCH ease of use, while the other three muscle cars earned a Marginal rating. It makes sense that a four-door model would feature better child seat anchors. But, it’s already more difficult to install a child seat in the back of a coupe, so if the LATCH anchors are harder to use, you might have your work cut out for you if you own a Challenger, Mustang, or Camaro.

We get it: most of you won’t care too much about the safety ratings on modern muscle cars. But, if you want to have some fun behind the wheel while still keeping you and your passengers safe, this could help with finalizing a decision.