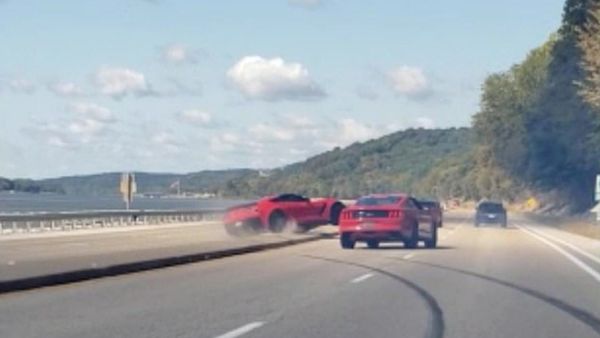 That didn’t “turn” out so well…

The jokes told ad nauseam by certain other automotive sites (you probably already know who we’re talking about) is that Ford Mustangs crash all the time. There’s a lot of arguing about the phenomena, with some blaming the solid rear axle used before the S550 Mustang. Maybe that was the reason for some of the crashes, but there are plenty of idiots who wreck out in high-powered, rear-wheel-drive cars with an independent rear suspension. Case in point: this C7 Corvette Z06 drive who thought he’d show a Mustang who’s boss on a public road.

In the video attached to this post, some guy unfortunately decides to film using portrait instead of landscape mode. Actually, we’re not kidding, because everyone knows that’s the most annoying way to take a video. Anyway, he’s traveling behind a red C7 Z06 driving next to an S550 Mustang on a four-lane road in Grafton, Illinois. Suddenly things take a turn for the worse, pun fully intended.

You can hear the Z06’s LT4 supercharged 6.2-liter V8 rev. Then tire smoke kicks up as the American sports car lays down some rubber and rockets ahead of the Mustang, which isn’t revving its engine at all. Those are always the best races, when the guy you’re supposedly smoking doesn’t know there’s a race and isn’t pushing his car at all.

For reasons we can only speculate about, the C7 Z06 suddenly veers left in front of the Mustang, spins out of the control, and goes over the island in the road. Not that it’s the main issue, but we’re 99-percent sure it’s gonna need quite the alignment and maybe some new suspension parts after that. Thankfully, the idiot didn’t get hit by oncoming traffic, but it looked kind of close with the first car to pass him by.

We love powerful cars, but some people just aren’t cut out for them. For some, sticking to something like a Toyota Corolla might not be a bad thing.