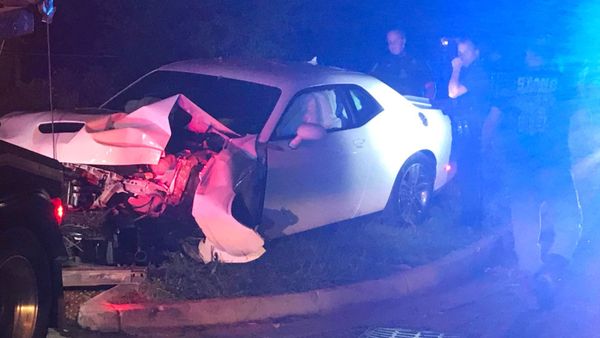 It’s always painful to see a powerful muscle car wrecked out, especially when the driver was doing something illegal. That’s what happened recently in Florence, South Carolina when police were in pursuit of a Dodge Challenger 392 Scat Pack. During the chase, the driver of the Mopar lost control, crashing the car nose-first into a tree. As you can see, the results are pretty grim for the muscle car.

As for the people, there were two inside. Thanks to modern designs like crumple zones they apparently weren’t too badly injured since police say both jumped out of the car and tried to flee on foot. One was immediately caught and the other was able to escape. Police are still looking for the second suspect.

What sparked the police chase was a report of multiple shots fired just before 10 pm on August 11 in north Florence, which an officer heard. Multiple residents called in the shooting as well. When a bystander indicated the Dodge Challenger 392 Scat Pack was the vehicle involved. As police approached the driver reportedly fled and officers gave chase.

While the captured suspect was reportedly in the hospital after being taken into custody, it doesn’t sound like that person has suffered any life-threatening injuries. Thankfully, nobody was injured in the shooting either.

However, it’s sad to see a nice Mopar muscle car be needlessly ruined. The one consolation we have was that it didn’t have the Shaker hood, because that would’ve made this tragedy all that much more unbearable.

Florence Police haven’t released details of the chase, but if we had to guess this sounds like a case of an inexperienced and/or overconfident driver not being able to properly handle a high-powered, rear-wheel-drive car. While modern muscle cars have extra aids like traction control and ABS brakes, they do not eliminate driver error, especially as the vehicle is pushed to its limits or beyond. We’ve seen this happen pretty regularly and surely will see it more in the future.