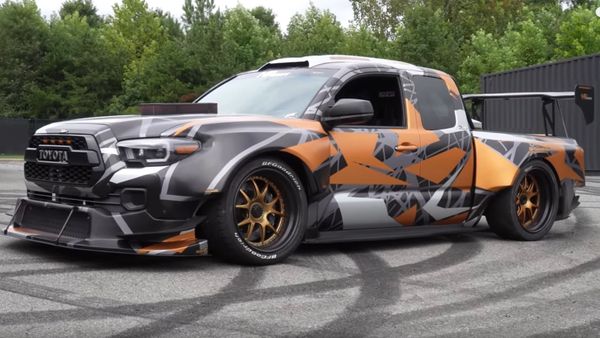 Yeah, that’ll move ya for sure…

We love Toyota Tacomas or “Tacos” as some feel the need to call them. But those bullet-proof trucks are known for their reliability and overall good off-road chops, not raw power and speed. Someone decided that needed to change when they dropped a 900-horsepower NASCAR V8 into a Tacoma, slammed it almost to the ground, and added some sick aero. The end result is absolutely wild. We hope this inspires some cool garage builds at some point.

Before you start saying you’ve seen trucks like this, we have too. The only thing is they were built by a motorsports team and were racing in a major event, which apparently this truck does to an extent but with a twist. This thing is built seven ways to Sunday, especially when you consider that 900-hp figure was achieved without forced induction.

To be clear, this was kept as Toyota as possible. That NASCAR engine is from Toyota TRD NASCAR Cup Car. It screams to a 10,000 rpm redline and the air cleaner sticks out of the hood to emphasize this is something wild.

Yes, this was built by professionals at the DeBerti Shop, and yes they do motorsports. This truck is supposed to be built for all kinds of events from rallycross to drifting. But this is no Jack of all trades, because as you can see in the video accompanying this article the truck is quite capable. As noted, this truck even has 74 degrees of steering!

The shop retained most of the body from the Tacoma but not much else. So just like a NASCAR vehicle and so many other racers out there, it’s really a custom build through and through. That doesn’t make this truck any less cool, but it’s nothing like what you would use to haul your dirt bikes or some fresh sod.

We can only imagine how fun and crazy this truck must be to drive. So, who’s going to be the first to chop up their Tacoma to build something inspired by this?