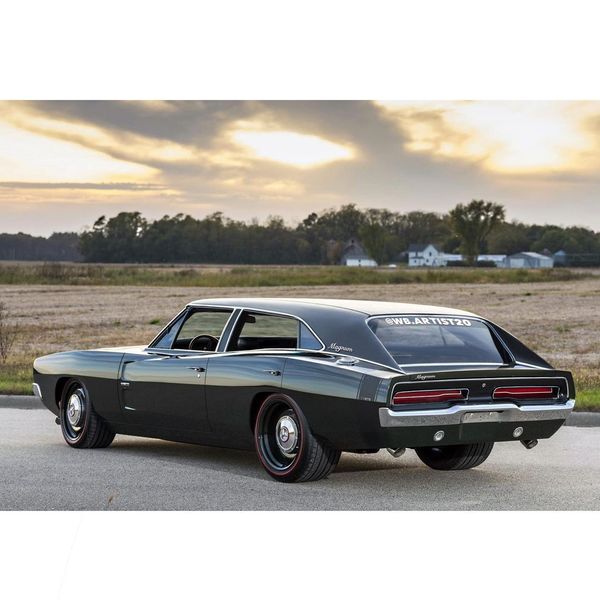 Before you shoot down the idea, take a look at these renderings by wb.artist20. While this never actually happened, looking at the renderings it doesn’t seem that unnatural or far fetched that it could have. It may make you wonder why Dodge didn’t think of this first. The simple answer to that question is that they did.

Despite what some would like for you to believe about wagons, they really are just as American as the muscle cars they were made alongside of. In fact Dodge even made a wagon version of one of its less famous models from the 1960s that had a lot in common with the Charger. The Coronet shared many of the exterior styling that made the Charger so iconic and even had similar engine options.

Unfortunately though, the wagon version of the Coronet lost nearly all of its muscle car looks in exchange for the extended seating and luggage capacity. That is where these renderings and reality differ as the artist was able to maintain the Chargers stance while adding two more doors, an extended roof, and what appears to be more interior room. Although you will have to use your imagination to get an idea of what the interior would look like because the artist stopped at just the single angle. It is also hard to imagine how the trunk or hatch in the renderings case would function though. In fact it almost appears that this design would have cost the Charger a bit of trunk space.

Another noteworthy detail is that the base for the renderings is anything but your average 1969 Charger, if there is such a thing. Wb.artist20 actually started with pictures of "Defector," a Charger created by Ringbrothers that was on display at the 2017 SEMA Show. It appears that taking pictures of famous cars and turning them into wagons may be a common theme of the rendering artist as he has given Paul Walker's 1969 Mustang Boss 429 the same treatment.