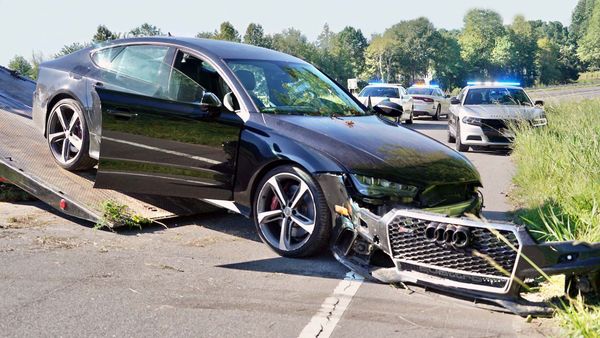 Fortunately, the crash occurred at a much lower speed.

An unnamed man was arrested in North Carolina over the weekend after crashing his new Audi RS 7 on his way to "show it off" in Myrtle Beach, South Carolina. According to a reporter from WRAL, the driver had previously hit speeds of up to 187 mph before crashing on an Interstate 95 exit ramp near Four Oaks, North Carolina.

Not only was this speed dangerous during holiday weekend traffic, but to make matters even worse, the Facebook post indicates that this excessive speed was achieved while driving through a construction work zone. Judging by the damage, which is mostly limited to a torn off front fascia, the high-powered Audi was probably only being driven around 30 or 40 mph when it lost control and ended up in the grass. The report says that when police arrived and questioned the driver, that's when he told them that he had been speeding to get to Myrtle Beach to show the car off, and this crash happened about 2.5 hours away from his final destination.

It isn't clear how the car's top speed was determined before the crash, but with the right options, a new Audi RS 7 is definitely capable of hitting those speeds. According to Audi's website, a base RS 7 has a top speed of 155 mph, but adding the ceramic brake option (with red- or gray-painted calipers) is what raises the "top track speed... to an eye-watering 190 mph." This $114,000 sport sedan is powered by a 4.0-liter bi-turbo V8, which is rated at 591 horsepower and 590 lb-ft of torque.