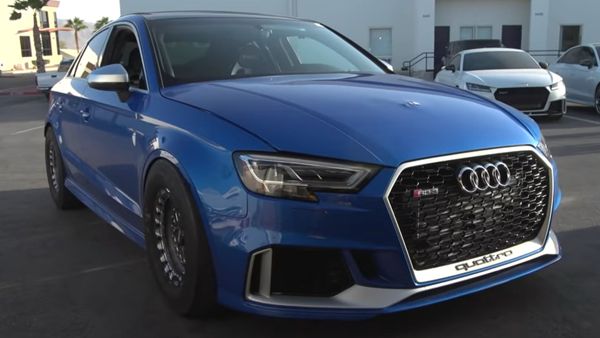 Just wait until you hear about this car’s quarter mile time and see what’s left stock.

Some people really love German-engineered cars, like so much they’d probably marry one if it were legal. For fans of American or Japanese vehicles who’ve never owned a German in their life this is likely a mystery or just written off as stupidity. However, this sick Audi RS3 boosted to 1,200-horsepower should make a believer out of some. After all, it’s running the stock transmission and more, which is just crazy.

Hoonigan caught up with Iroz Motorsport in sunny Las Vegas to check out this sweet ride. From the outside it looks pretty tame, at least as tame as any Audi RS3 can. After all, in stock form this sedan packs 394-hp and can run the quarter mile in the mid-12s or better.

But add a little bit of chaos to the mix, actually a lot, and this car turns into an animal. Iroz says it runs the quarter in 8.58 seconds at 166 mph. Under the hood is a 5-inch intake tube, which looks really out of place. It’s necessary considering Iroz threw a 73 mm turbo into the mix, which is pushing 56 pounds of boost! Of course, an engine doesn’t run on air alone, so there are huge injectors and fuel pumps. To handle all that, the engine internals have been swapped for more durable and more aggressive versions, like the connecting rods and pistons. If you’re not impressed, nothing is going to change your mind about this Audi, literally nothing.

What’s even more amazing is what’s still stock on the car. The steering wheel, dash, and center console are still of the factory variety. All the door panels and other luxuries are still installed, including air conditioning. Way more impressive is the fact the original transmission is not only still installed but completely unchanged from the factory. However, the differential and clutch aren’t garden variety. Plus, this of course is running quattro all-wheel drive.

Watch the video and see this Audi in action.

This car is officially the fastest Audi RS3 on earth, which is quite the title. Then again, this is quite the build and it’s definitely worthy of the honor. Incidentally, wheel horsepower is estimated at 1,100 thanks to trouble with the dyno.