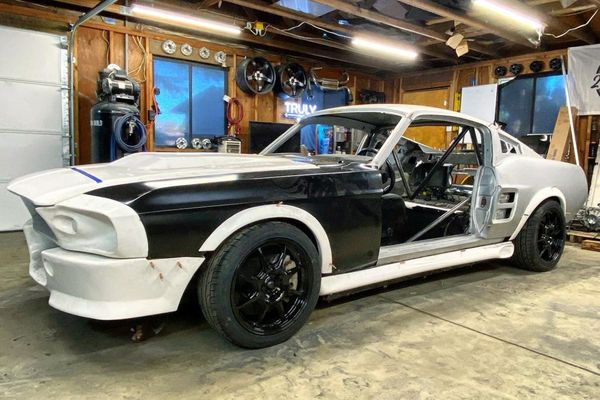 A body-swapped Mustang restomod project by B is for Build was confiscated due to legal issues that arose from the Gone in 60 Seconds trademark name.

Recently, we stumbled across a build that involved a 2015 Ford Mustang with a 1967 Shelby GT500 body swap that was in the process to resemble a modern-day Eleanor, the elusive Mustang from Gone in 60 Seconds. We have an unfortunate update regarding the tribute Mustang that the B is for Build team was creating and documenting on their YouTube channel. While the project likely sounds easy enough to someone who might not know about building cars, this was a tedious task that involved an incredible amount of work. In fact, the project was far from finished, but it did see its first test drive. That test drive would be its very last for the YouTubev team as the car was recently seized because of a legal issue with the owner of the Eleanor trademark.

The B is for Build team were handed a cease and desist order to remove all videos from their YouTube channel related to the Eleanor project. In order to settle the legal matter, the car had to be physically confiscated. Sadly, this project is no longer.

Eleanor Licensing LLC. is owned by Denice Shakarian Halicki, a widow to the H.B. Halicki, the man who created the original 1974 Gone in 60 Seconds movie. Sadly, he passed away when he was involved in an accident while they were filming the sequel. The movie was aborted. With her company, Halicki owns the right to any Mustang named Eleanor that would have any ties to the movie franchise. In the mid-2000's, even Carroll Shelby found himself in the hot seat with Halicki when attempts were made to sell updated Eleanor replicas, cars that looked nothing like the '73 fastback featured in the original film. Sure, people have replicated Eleanor by turning their cars to mimic the icon, and even a GT500E body kit exists to purchase. But one can't expect to create content for profit with the use of the Eleanor name without Halicki legally shutting it down.

Halicki went after none other than Carroll Shelby in the mid-2000's after one of his companies attempted to sell replicas of the updated Eleanor, which looks nothing like the 1973 Ford Mustang fastback in the first film.

Chris Steinbacher, the channel’s host, said the following regarding the situation.

"I do know that I can give my opinion on the team at gonein60seconds.com and tell you they are terrible people, parading around as car people, [with] a history of being lawsuit-happy dickheads. Just the most unpleasant, terrible people I've ever had the misfortune to have to deal with in my life," he said. "And that's not just me being mad about what happened, it's just the way these people decided to handle themselves."

When it comes to classic Mustangs on the big screen, the two most iconic that come to mind include the Bullitt Mustang chasing down a Dodge Charger through the hilly streets of San Francisco, and Eleanor the beautiful 1967 "Shelby" GT500 Mustang fastback from the remake of Gone in 60 Seconds. The B is For Build team is currently working on a new project revolving around the Mustang S550, the pony car's latest platform. The goal is to body-swap the modern S550 with the iconic 1967 Shelby GT500 body that we all affectionately know as Eleanor.

If you attended last year's SEMA show or were keeping up to date on the builds there, you may remember an LS-swapped Lamborghini Huracan. That build was one of the finished products of a project built by the B is for Build team.

Alongside Nicolas Cage and Angelina Jolie, the biggest star of the Gone in 60 Seconds remake was the elusive Pepper Grey 1967 Ford Mustang fastback made to appear as a Shelby GT500. Randall "Memphis" Raines (Cage) had a tumultuous relationship with Eleanor, and he was taken on an insane ride when trying to reign it in as the last car on the heist to save his brother Kip from the grips of an evil drug dealer. Designed by Steve Sanford, the pro-touring Eleanor became a household name after it stole the hearts of everyone who watched the movie. Even though the movie came out in 2000, the '67 Eleanor is still idealized and recreated today for many personal builds. Hugely popular, one of the three movie cars sold at Mecum's Indianapolis auction in 2013 for a staggering $1 million.

The guys at B is for Build are taking a different stance on recreating Eleanor by using a 2015 Mustang GT instead of starting out with a classic. The goal is to give the car the ultimate body swap, as the car will have modern reliable power with the aesthetic of a '67 Shelby. This project isn't quite done yet, but there are videos posted up on their YouTube channel to document the project. Trying to get the modern chassis to work in harmony with the '60s vintage metal seems to be no easy task, but it looks like the B is for Build team is committed to seeing this to completion, and we can't wait to see it come to life.

As of right now, it seems like B is for Build took down a bunch of videos regarding the Eleanor Mustang and made an Instagram post saying that they ran into an issue with the car that they can't resolve at the moment. A video by the team will be posted eventually regarding the Eleanor Mustang, and it seems as if this project may not see completion. Hopefully that is not the case and there is some way to work around it. We guess we will find out here shortly.