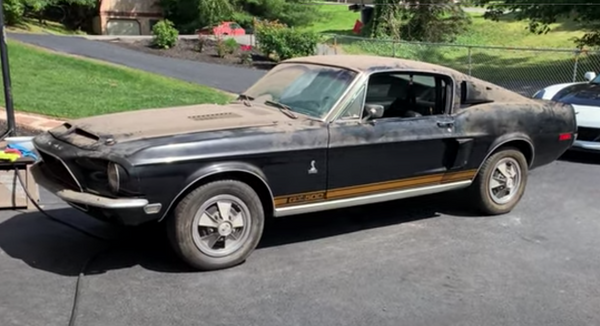 Currently in the process of restoration.

Barn finds are becoming increasing popular for some reason. More and more of these cars seem to be discovered in a barn, shed, warehouse, or any sort of storage area to try and keep it safe from the elements while the car increases in value. Here we have a 1968 Shelby GT500 Ford Mustang that was found sitting in a warehouse since 2004.

Blanketed under a couple decades of dust, the finish of the numbers-matching Shelby is Raven Black. According to the YouTube description, the car runs and drives. Under the hood sits a 428 Police Interceptor V8 engine topped with an aluminum mid-rise intake and two four-barrel 600 CFM Holley carburetors. Power is shifted to the rear wheels via a TopLoader 4-speed manual transmission.The car produced 355-brake-horsepower at 5,400-rpm and 420 lb/ft of torque at 3,200-rpm.

Plenty of the body components from the GT were made of fiberglass and that includes the front end, hood, rear taillight panel, quarter panel extension, and side scoops.

According to the description on YouTube, this exact car was found with the Lime Gold 1968 Shelby GT500KR in Florida by Classic Cars of Sarasota. This 1968 Shelby GT50o0 Ford Mustang has started the restoration process as of January 2020.

As mentioned before, these barn finds tend to be more commonplace as these classic and rare cars are being discovered in barns, sheds, abandoned garages, and even left to rot away in farm fields far out of sight. Lucky for this classic Shelby GT500 Ford Mustang, it looks like it is going to see the road once again when its restoration is complete. Thankfully, this one didn't become a casualty to the elements or the crusher.