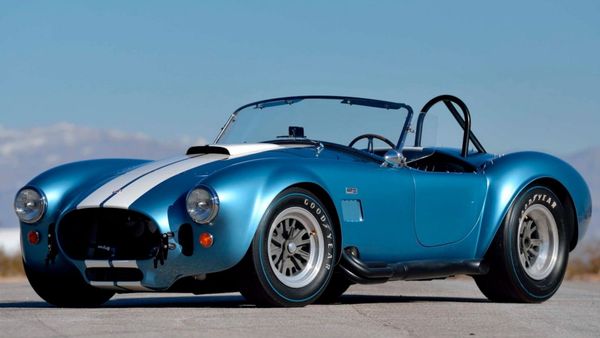 You don’t see these just lying around all over the place.

Of all the original Shelby Cobras, the 427 S/C is the most legendary and desirable. A mere 29 of these semi-competition roadsters were constructed back then, so it’s entirely possible you haven’t seen one in real life. While there are some nice reproduction models out there, when it comes to collecting nothing beats having the original 1967 Shelby Cobra. One of the few made back in the 60s is now heading back to the market and it’s expected to fetch millions.

As you’d expect with such a high-roller collector car, this Shelby has been thoroughly documented. It was ordered by John Grappone of Grappone Ford back in October of 1966. The first owner kept it until 1982 and since it had been owned by a Ford dealer, it’s technically the last “new” Cobra sold.

Since then it’s had four other owners and has accumulated just 10,760 miles. The original engine is still installed and running great. The original magnesium Halibrand wheels and Goodyear Bluestreak tires are also present, which is pretty incredible. Appearing in the Shelby Registry, this car is roundly considered the most original and correct 427 S/C Cobra out there.

That’s not to say there haven’t been a few little tweaks done here and there. Grappone Ford installed a set of Holman Moody medium riser heads, which changed compression from 10.4:1 to 12.5:1. To get that to fit, the dual-quad intake manifold had to be shaved.

This 1967 Shelby Cobra will be headlining the Mecum Gallery Exposition, which is separate from but will be done in conjunction with the Mecum Indy 2020 auction next month. Expectations are high and understandably so, considering this same car was sold on May 14 during the Spring Indy auction with intense bidding pushing the price to a lofty $2.89 million. That means there’s a real possibility this time it could crack the $3 million mark. While that’s a lot of money, it’s still a far cry from the priciest Cobra to have been auctioned, so we won’t be seeing a record set.

Check out the Mecum listing here.