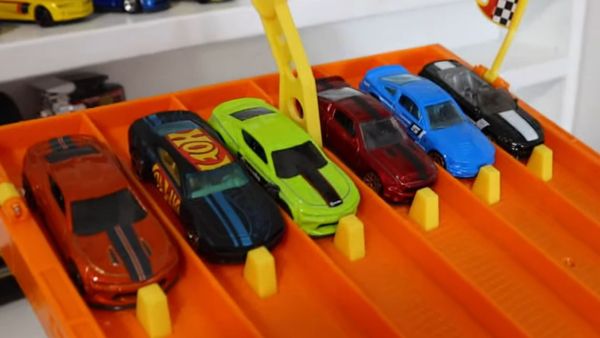 This is what happens when all the races get canceled.

While we’re seeing some races coming back, fans aren’t allowed at the venues and some of the events have been lacking in charisma. Left with a void in their souls, motorsports enthusiasts have been turning to other means to get their fix. Sure, there’s sim racing, but what’s even better is good ol’ analog Hot Wheels drag racing. And there’s no grudge match more American than the Ford Mustang vs the Chevrolet Camaro. Combining the two is an epic thing.

Peak Time Racing is a YouTube channel dedicated to diecast car collecting, so they’re a bit of an expert when it comes to tracking toy cars. At least that sounds good and this is all in the name of fun, nothing serious.

Actually, we should know better than to say anything comparing a Mustang to a Camaro is in the name of simple fun, even if this is just about some Hot Wheels diecasts racing on a plastic track. We fully expect for the fans of these two American muscle cars to argue about whether this was a fair contest or not, whether it’s representative of how the actual cars match up, and probably some finer points nobody could even predict.

Mustang fans will hang over the Camaro crowd that their pony car came first, even though the Plymouth Barracuda technically edged it out as the very first pony car to hit the market. They’ll also gloat over how the Camaro was shelved for several years, never mind the fact the Mustang was almost changed into a turbocharged V6, front-wheel-drive Mazda.

Really, though, this is about having some racing fun when we’re not really having any, unless you’re playing Forza online with your buddies. But the Camaro fans no doubt are going to gloat now. It’s kind of sad, really, but this is what’s become of 2020.