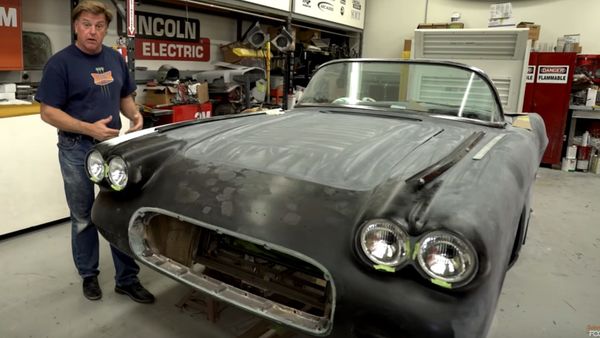 Will the designer hit a home run or strike out?

Chip Foosehas made quite the name for himself in part because he’s been on television and in part because a lot of people pay top dollar to have him rework their classic cars. Not everyone is a fan, with some downright hating what he does. This time around he’s taking on the sacred work of the C1 Corvette, a vehicle many think is perfect in every way. It’s time to see how he plans on improving on the design.

With the C1 there are a lot of variations in design from one model year to the next. The car in question is a 1962 Chevy Corvette, so it’s the final iteration of the C1 It’s not encrusted with chrome teeth like the 1957, so any think it’s one which shouldn’t be messed with. Just what will Foose do to it?

The C1 ‘Vette is a work in progress at the moment. So far Foose and his team has chopped off the rear fenders and widened them by 2 inches each. On the front fenders they’re bringing the lip out so they match the width of the rear.

That’s not all. The lower grille has been brought up and for now the cross member between it and the upper grille is gone, but it’s not clear if it will be reinstalled or not. By adding an extra fiberglass piece, they’ve eliminated the seam around the headlights. Another big change to the front fascia is no more drop-in bumper. Instead, it will be a wrap-around like what you see on the rear.

Quite a few other tweaks have been added, like an upgraded chassis and GM Performance LT4 engine, so it should provide a different performance experience.

Unfortunately, Foose hasn’t revealed the final product, but so far it looks pretty good. While the man might get a little crazy with some of his renderings, when it comes to actual vehicles he’s a little more sensible in his nips and tucks.