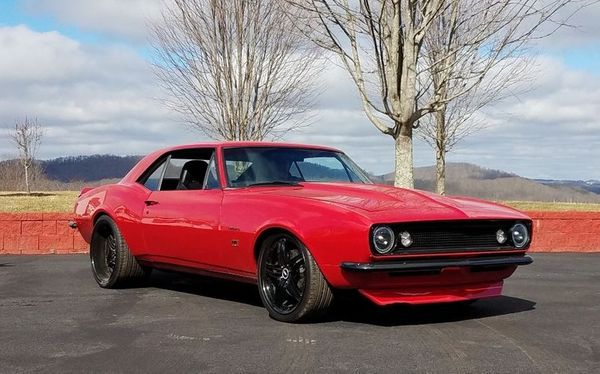 These are some cool cars getting new owners!

Thursday is a great warm up day for bidding at GAA Classic Cars. This means some really cool cars get sold for not a lot of money, and some do. Here are a few gems that are worth a mention.

Who doesn't love a well-done first-generation restomod? This Camaro has been on our radar since the inventory was announced for the February GAA auction. It has looks to kill, and a modern powertrain to back it up! Amongst the highlights are the 5.3-liter engine that is backed by a ultra-fun T56 6-speed transmission, and accompanying upgrades to compliment the beast's new heart.

This truck lived with its original owner from Pismo Beach, California before heading to the east coast. It is a very well-maintained example of the early Toyota pickups, but does have a few upgrades as well. Sporting the original paint, this 4-wheel drive truck has new vented disc brakes up front, new interior, powder coated wheels, and new Ranchero 5000 shocks.

Is there a vehicle out there quite as cool as the El Camino? We feel these cars never get the respect they deserve when people talk about the cars from the late 1960s. This example is a great representative when the car/truck was pretty awesome. It has been freshly restored, and has a few updates, here and there, but remains pretty true to original form.

Black on Black 1978 Pontiac Trans Am

What's cooler than being cool? This block on black second-generation Trans Am! This T/A is loaded with options, and powered by a 400 cubic-inch 6.6-liter growling V8. The sleek black exterior paint job is complimented by the black leather interior. Bonus: it's a manual!

The Dodges of the 1970s are easily the highest rising stars over the last decade, and this Challenger makes it easy to see why. This muscle car is aggressive, large, has a numbers matching 340 cubic-inch engine, backed by an automatic transmission, and is ready to be driven!