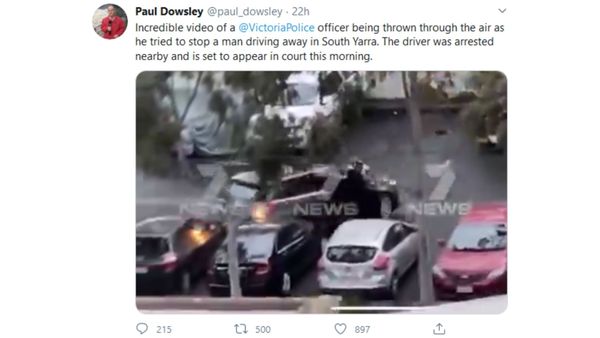 He also broke quarantine to do it.

To some people, breaking government-mandated quarantines is about the worst thing anyone could do. This is especially true in countries like Australiawhere strict lockdowns have been ordered to stop the spread of the novel coronavirus. Police say a man in Melbourne not only breached the stay-at-home restrictions in place but also went on a car theft rampage. Oh, and he tested positive for COVID-19.

Where things unraveled for alleged car thief Jahdon Tamati, 30, was when he was stopped and questioned by police while on foot for violating the stage four lockdown rules in place for Melbourne. It’s not entirely clear why he wasn’t detained right then, but Tamati fled on foot to a nearby 2015 Range Rover authorities say he stole earlier in the day.

Jumping into the driver’s seat, Tamati wasn’t able to close the door before a Melbourne police officer courageously leapt into the open door and began struggling for control of the luxury SUV. Instead of surrendering then, video of the incident shows Tamati reversed quickly out of the parking spot, hit another vehicle, and sent the police officer flying through the air. While the cop hit another car pretty hard, he hopped right back up and tried to pursue Tamati, who sped away. That officer reportedly only suffered minor injuries, so he’s extremely lucky.

From there, police say Tamati ditched the Range Rover a few streets away, but apparently he wasn’t successful in stealing another vehicle. A little while later they caught up with the accused car thief and took him into custody without incident.

Tamati was reportedly taken to a local hospital for a “non-related medical condition.” A police guard was stationed to make sure the man didn’t try playing Grand Theft Auto in real life again. Now Tamati is facing 20 charges, including possessing a controlled weapon, and has a court appearance scheduled for November 2.