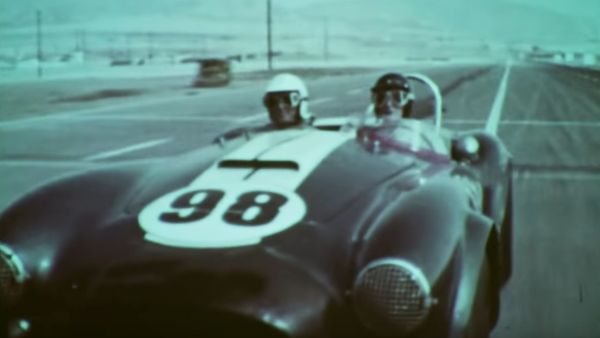 See the legendary racer in action.

Petersen Automotive Museum has released a video of the legendary race car driver Ken Miles and Carroll Shelby testing out the Shelby Cobra 289. This is an interesting glimpse into how things were back in the day, especially considering the renewed interest in both figures since Ford V Ferrari was released.

As should be expected, this video is very 1960s, complete with a jazz soundtrack and all the wonderful film quality available at the time. However, it should be noted that even without the use of drones and other advanced camera technologies, the shots the filmmakers got of the Shelby Cobra out testing are impressive, to say the least.

Miles explains in the video that the Shelby team is fine-tuning air pressure in an attempt to shave a few hundredths of a second off the car’s lap time at Riverside International Raceway. In racing, every last advantage you can use could be the difference between a podium finish and being several places behind.

Later in the video you get to see Miles in a race at the track in a good-sized field. To see him going toe-to-toe with his peers in Porsches, Lotuses, Jaguars, and so forth is a real treat. It’s a rough-and-tumble view into the motorsports world.

The intro is a little weird, and by a little we mean a lot. If you want to skip past that and enjoy seeing the Cobra in action, go to 7:55 and fire up the video there. However, just before that you get to see Ken Miles not behind the wheel of a car, alongside his son Peter as they play with slot racers. It’s enjoyable to see the man a little more relaxed.

This video also shows the Concours d’Elegance, so you can get a glimpse of how things were run back then. It’s also plenty of automotive eye candy. The video goes on for almost an hour, showing all kinds of different aspects of car culture from back in the day. If you’re sitting in lockdown and need something to do, it’s not a bad way to relax and maybe learn a thing or two.