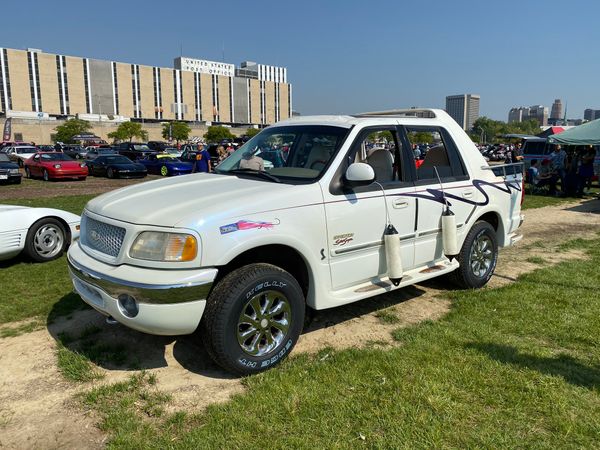 You seriously have to question the taste of anyone who thought this was a good idea.

Way back at the 1998 SEMA Show, the Ford Expedition XLT SeaScape caused quite a few car enthusiasts to stop and shake their head in sad disbelief. After all, someone took the time to chop up the full-size SUV and make it look somewhat like a boat, and for what? It’s about on the same level as dropping an LS5 into a Volkswagen New Beetle, because there’s really no logic, even fun-bad logic to it.

Making the story even more bizarre, the Ford Expedition XLT SeaScape ended up in the possession of a guy working at McDonald’s in Mississippi. Somehow that seems all too appropriate. Dough Tabbutt ran across it while on a cross-country road trip, offering to buy it on a whim. As Tabbutt explains in the video, he basically makes bad decisions to then have good car stories, and buying this Ford turned into a boat sure was a horrible decision.

Anyway, the story of Tabbutt trying to buy a crazy, horrible old SEMA vehicle off an elderly man restocking the soda machine at McDonald’s, after climbing out of a Lamborghini, which arrived with an Aston Martin is just hilarious. Other workers at the fast food restaurant are freaking out because they probably figure these out-of-towners are multi-millionaires.

The provenance of this truck is just as bizarre as the build. It was bought by a guy who owned a boat company of some sort, then signed over to someone to pay them for work, then given to that guy’s parents for paying off his student loans.

One of the best parts of this story is the janky condition of the SEMA Ford Expedition XLT SeaScape. You might think such a creation would’ve held up great under the test of time, but it didn’t. A piece of wood was covering the sunroof, with white tape wrapped around the ends to keep it on the truck. But ultimately this horrible car purchase gave Tabbutt a funny story, although he was stuck with the truck and its many flaws.