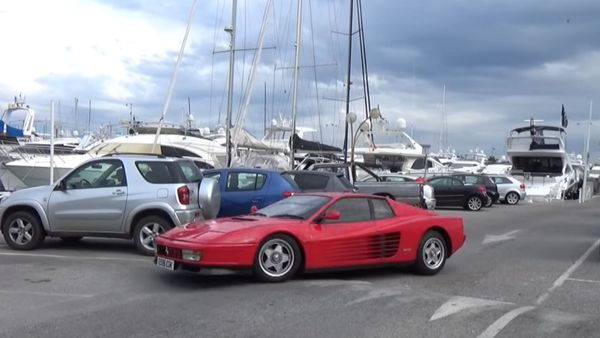 Yeah, this is a little crazy.

Normal people like to pick the most reliable, comfortable, and practical vehicle possible for going on a long-distance road trip. Car enthusiasts aren’t exactly normal people. We value performance, the cool factor, and novelty in our road trip rides. Those things and others are behind this epic 2,000-mile trek to the French Riviera in a Ferrari Testarossa.

There’s another wrinkle in this trip: the guy did it in the winter. Yes, that’s right, he decided to road trip in a rear-wheel-drive sports car on potentially slippery roads. Oh, plus the roads could be salted. That might not sound like the greatest idea, however Harry, the owner of the Testarossa, takes some preventative measures but they don’t include winter tires.

This fun little jaunt through France and Britain was documented on the YouTube channel Harry’s Garage. It’s run by Harry Metcalfe who is certainly no stranger to the automotive scene, considering he was one of the founders of Evo magazine and done many other impressive things, including working as a consultant for Jaguar Land Rover. In other words, the man knows his cars. He also likes to take classics on long trips, so he’s also a little bit crazy, but in the good sort of way.

Before you think this ends poorly, here’s a little spoiler alert: the Ferrari doesn’t break down and it doesn’t catch on fire. In fact, the engine runs a little cold during the trip, which means the heater isn’t working properly. That might be shocking to some, but the Testarossa is actually a fairly reliable car, at least when it comes to Ferraris.

To be fair, the Testarossa is far more practical of a car than many other Ferraris. As Harry Metcalfe rightly notes, the cargo area is more spacious than in most other Ferraris out there, at least until the Purasangre SUV launches. He even fits two folding bicycles in the car and that’s amazing.