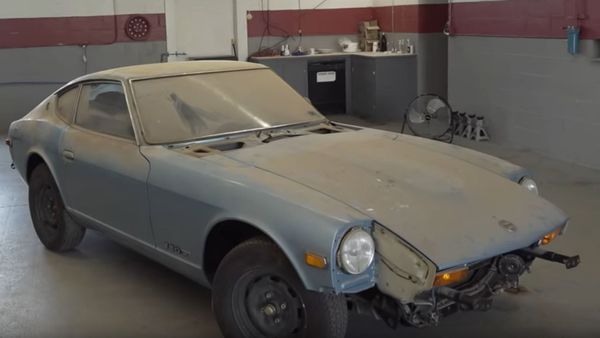 Also, this car’s been driven only 350 miles.

Barn find cars are incredibly interesting to enthusiasts and even people who aren’t that into cars. They’re kind of like a time capsule, an accidental one, preserving how things were back in the day and suddenly emerging once more. You could also compare them to buried treasure like the kind we’ve heard about in pirate tales. That analogy certainly seems to fit with this Datsun 280Z which has a claimed 350 original miles. In the accompanying video, we get to see this thing get washed for the first time in 44 years.

With true barn find cars, the exterior at least is going to be filthy. This car was so bad when the new owner first looked at it, he couldn’t see the interior through the windows. Some of that dirt was disturbed just by moving the Datsun, but as you can see in the video it was still pretty awful. However, the interior had the shipping wrap on the driver’s seat, the tag on the sun visor, and they say it still smelled like new.

The current owner of this car says he’s a big Z fan, especially of the Datsun models. He had cleaned up a barn find 1984 Nissan 300ZX his late father-in-law owned and was showing that off when someone said they knew of a Datsun 280Z that had been sitting in a barn “all its life.” That contact later was able to arrange for a meeting and eventual sale of the car.

There’s quite the story behind why this car was left in a Hershey, Pennsylvania barn with so few miles on the clock. The current owner spoke to the original owner, Dave, who brought the car home from the dealer. A dent in the fender and mismatched paint after the dealer replaced the fender led to Dave beginning a disassembly process of the exterior trim in preparation for a complete repaint. However, fate stepped in and Dave was laid off. By the time the man’s financial fortunes improved, he no longer had the interest in working on the sports car, turning his attention instead to his new passion, pickups.

Some call this the rarest Datsun 280Z barn find ever. It just might be, and if not it’s definitely up there.