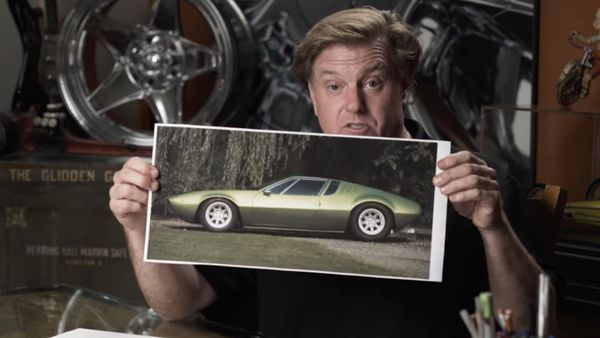 I’m back with another critique of a Chip Foose Draws video. These have been surprisingly contentious as some have accused me of simply hating everything the man does, which I’ve pointed out isn’t true. Look, despite what black-and-white thinkers try to push, I and anyone else can like some things the man does and hate others. This time Foose is revamping the DeTomaso Mangusta, which should be less controversial than him reworking the Pantera, at least by a little bit.

In fact, some of you might not know the Mangusta, a car with production capped at just 401 examples. It definitely has the look of a DeTomaso and is easily identifiable as the sibling of the Pantera, but Foose thinks he can make it look even better.

His working on the Mangusta isn’t Foose trashing DeTomaso. In the video he says he’s always been a fan. He even says the Mangusta is one of his dream cars. However, he can also see some room for improvement, even if it’s minimal.

As you’ll see in the video, Foose focuses on enlarging the wheels and getting the color of the DeTomaso Mangusta just so. He thinks the body is fantastic the way it is, so he pretty much leaves it alone, moving a side market back a little, which is very brave and strong of him. Do you think he made the right call?

Despite how some people act, You don’t have to absolutely detest Foose or think he’s the car messiah. Some of his designs are great and others aren’t so much. I think the man gets a little wild when he’s sketching because there’s zero risk, he’s not cutting sheet metal so he can just play and let his mind do things he might never consider on an actual car, so it’s surprising he didn’t do that this time.

To say some of his drawings are awful doesn’t mean Foose is a bad guy or does horrible customization work. I can’t and won’t just praise everything he or anyone else does just because some people are offended since that wouldn’t be honest. Pus, I’m pretty sure Foose is a grown adult and has learned to deal with criticism, unlike some people.