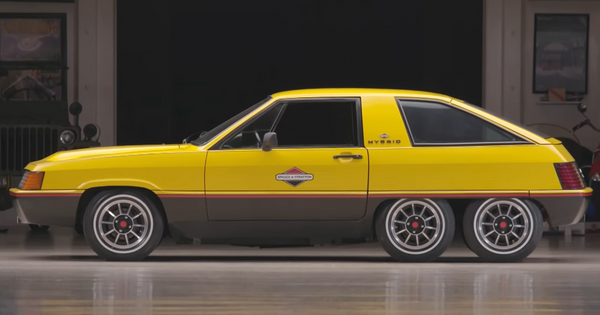 One-of-a-kind cars are a lot of fun. Sure, they might be expensive and difficult to maintain, depending on just how unique they are, but they are quite the conversation starters. That’s certainly true of this 1980 Briggs & Stratton Hybrid, a six-wheel concept hybrid car. You likely haven’t seen one before this appeared on Jay Leno’s Garage, so if you have you’re one of the lucky people, because this car hadn’t been out on public roads since 1988. Even Jay Leno didn’t know about the car until just before it was on his show.

Most people have no idea that Briggs & Stratton, which is known for its engines, built a car at any point in history. That makes this six-wheeler a part of automotive history which definitely was in need of being highlighted.

Also, obviously notable about this car is the fact it’s a gasoline-electric hybrid. While too many people these days believe the first hybrid was the Toyota Prius, the fact is the tech goes back to the Victorian period when Ferdinand Porsche created a car with both electric and gas motors onboard.

The question everyone is going to have about a six-wheeled car is which ones are driven. Adding to the quirkiness is that only the center wheels are driven. That rear axle is only there to carry the tremendous weight from the lead-acid batteries.

Not surprisingly, this hybrid car is owned by a Briggs & Stratton engineering technician. He fell in love with the vehicle while doing shows with it, and the rest is history. Let this be a lesson: if you spend enough time around a quirky car, you’re going to start to feel fondly for it, so beware.

Honestly, this is the man to preserve such a piece of history. After all, he has professional knowledge of how to maintain it, and not surprisingly it looks amazing. Interestingly, it’s a parallel hybrid and the driver can select which motor powers the wheels, even using both simultaneously. Amazingly, the owner says using just the electric motor the car can go about 40 to 60 miles. That’s hilarious, considering not too long ago many EVs matched that range.