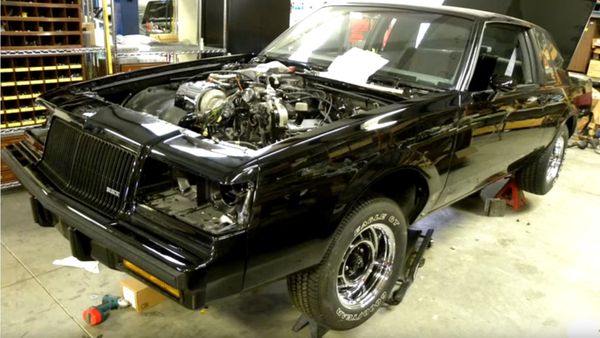 This is far better than TV shows, so enjoy!

It’s no wonder so many muscle car enthusiasts absolutely love the 1987 Buick Grand National. It was the ultimate version of the Buick created to celebrate the end of the platform which had surprisingly become one of the performance highlights for the decade. Today, it’s one of the most collectible Buicks ever made, in no small part because a mere 500 were produced. That’s what makes seeing how someone abandoned one of these rare, special cars difficult. However, as you can see in the video included with this article, that gets the full restoration it so richly deserves.

The average person on the street probably wouldn’t think much of these cars, even if it were beautifully preserved. In a way that’s understandable since they have the look of so many ho-hum GM products from the 1980s. The only outward indication anything interesting is going on is the blacked-out exterior. To enthusiasts that’s a calling card.

Truly observant enthusiasts can tell the apart from the Buick Grand Nationals thanks to one fairly small detail: the front fender ports. Those are the dead giveaway. As for the interior, the two cars look nearly identical, save the gauge cluster. For the GNX a set of analog Stewart-Warner gauges were used.

What truly makes the Buick GNX a special car is the engine. Buick turned to ASC/McLaren for help, and the result was a ported and polished cylinder heads for the 3.8-liter V6, plus a larger turbocharger with intercooler, higher-flow exhaust, and a new computer chip. With those tweaks in place, the GNW was officially pushing 300-horsepower and 380 lb.-ft. of torque, numbers which were astounding for the late 80s.

Enthusiasts were head-over-heels in love with the Buick GNX when it launched for 1987 and that hasn’t changed since. Today, these cars fetch huge sums when auctioned or sold privately. This video might be one of the few chances, maybe even the only chance you get to see one pulled apart and fully restored. Most people absolutely baby their GNX, so we can’t imagine how this muscle car came to be left for dead in Louisiana, buried in mud.

See our comprehensive vehicle overview for the 1987 Buick Grand National including production numbers, performance specs, factory colors, and OEM brochures. Also, check out additional model years or view other Makes and Models in our Research center.