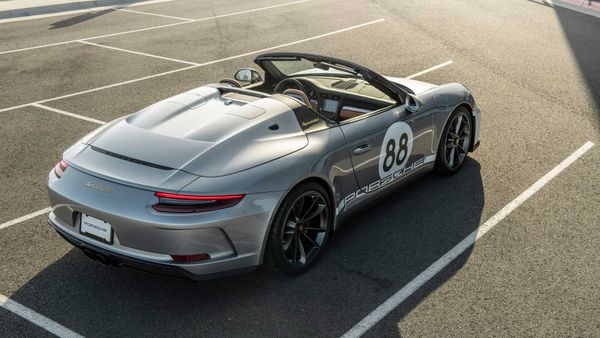 Porsche matched the actual auction price of $500,000 to bring the total amount raised to $1 million!

As the world collectively grapples with the caronavirus pandemic, many companies are stepping up to provide any help possible. For its part, Porsche teamed up with RM Sotheby's to raise money for COVID-19 relief by auctioning off the very last 991-generation Porsche 911 that was ever built, which just happens to be an ultra-collectible 2019 Porsche 911 Speedster.

Update: This auction ended today. When all the bids were in, this rare car ended up selling for $550,000 including buyer's fees, and Porsche announced that it would match the actual auction price of $500,000. That means a total of $1 million was raised for the United Way Worldwide’s COVID-19 Community Response and Recovery Fund.

Porsche only built 1,948 examples of the 991 Speedster to not only mark the end of this generation 911 but also to celebrate 70 years since Porsche built its first sports car, the legendary 356. The two-seater Speedster has a distinct look with its double-bubble tonneau cover created from carbon reinforced plastic, and it also uses the chassis setup and 4.0-liter boxer engine (rated at 502 horsepower) from the 911 GT3. The Speedster being auctioned off is brand new with just 20 miles on it so far, and it comes painted in GT Silver Metallic Paint with the optional Heritage Design Package.

In addition to the car itself, the winning bidder will also receive a matching Porsche Design Chronograph 911 Speedster Heritage Design timepiece (estimated to cost around $10,000), a framed letter of authenticity and a leather-bound book about this auction car. The winner is invited to take delivery of the 911 Speedster at The Quail during 2020 Monterey Car Week as well as a guided tour of Porsche's world headquarters in Stuttgart, Germany. The 2019 Porsche 911 Speedster itself was an instant collector with a retail price starting at $311,940, but expect this auction car with all the special extras to sell for a lot more to raise money for this global cause.

Registration for this single-car auction opens on Monday, April 13th at 10 a.m. Eastern, and bidding will run from Wednesday, April 15th at 11 a.m. Eastern until April 22nd at 1 p.m. Eastern.

Source: Porsche via RM | Online Only