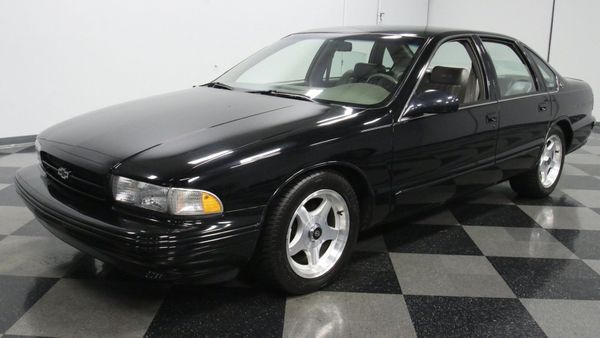 This two-owner Southern car is a desirable console shifted SS.

As cars from the 1980s and 1990s become more collectible, one car that has always caught the eyes of enthusiasts was the 1994-96 Chevrolet Impala SS. With more than 60,000 of these '90s-era muscle cars built over three years, there are plenty of these sedans out there, but examples like this 1996 Chevrolet Impala SS being sold through Streetside Classics are some of the more desirable versions.

The 1996 model year marked the highest production numbers for the Impala SS and black was the most popular color, but what really makes this year desirable among collectors and enthusiasts is the console-mounted gear shifter and the analog speedometer and tachometer. This generation Impala SS is easy to spot thanks to its more aggressive body with 17-inch mag wheels and a monochromatic paint job. In addition to this car's sinister Black paint job, the Impala SS was only offered in two other colors: Dark Grey Green and Dark Cherry Metallic. Under the hood, these big muscle cars backed up their stylish looks with a powerful 5.7-liter LT1 V8 rated at 260 horsepower.

As for this particular Impala SS, it's a two-owner car from the South that survives with 75,000 miles. For its age, that is pretty low mileage, and the overall quality of this muscle sedan shows that this car was well loved and equally well cared for. Pictures of the car show a super clean exterior, and a cabin that shows no wear on the seats. It would appear that this Impala is completely unmodified as it still has the factory wheels and stereo system