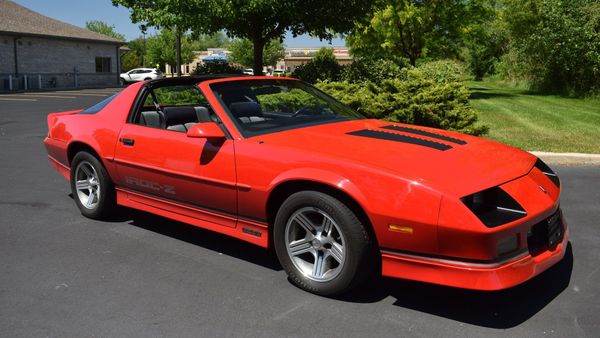 To those in the know, this is far more than just a car.

After the 1980 season, the International Race of Champions or IROC series took a break from competition until 1984. Collaborating with Chevrolet, the series commemorated its return using the redesigned Camaro Z/28, which was called the IROC-Z. Hailed by many as a return to form for Chevrolet muscle cars, the IROC-Z is being celebrated today. That means values on clean examples like this one are on the rise, so if you’re looking for an affordable vehicle that could appreciate significantly over the coming years, you might want to take a close look at this third-gen Camaro.

One thing that’s evident from the photos is that this red IROC-Z has been well cared for, instead of being left to rot, which is what happened to far too many. The paint has a shine that lets it show well, while the iconic IROC-Z graphics on the side are intact. Zero curb rash is visible on those factory five-spoke wheels, plus the rest of the exterior trim pieces show no sign of sun fading or deterioration, which quite frankly is remarkable.

It’s pretty much the same story for the gray cloth interior. While not perfect, with slight signs of wear on the steering wheel, center console, and a few other areas, it’s still been remarkably maintained, especially with all the factory controls. This car still has the AM/FM cassette stereo, so you can pop in your old Twisted Sister tape and jam out, just like old times. The backseat appears to be barely used, not that they saw a lot of action back in the day.

While it might not be impressive by today’s performance standards, the 5.7-liter V8 gives this IROC-Z some decent get-up-and-go. For the 1980s it was a force to be reckoned with, making this American muscle car one many people remember fondly.

A lot of great features are included on this 1988 Chevrolet Camaro IROC-Z, like the T-top roof with factory storage bag, fog lights, and power-adjustable mirrors. Rock Solid Motorsports is offering this clean muscle car for sale, if you’re interested in grabbing it.