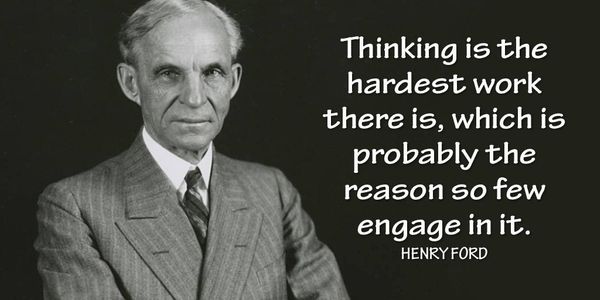 Let the words of Henry Ford motivate you to conquer hardship.

As a whole, 2020 has been the most troubling year in recent history, and we’re not even done with it. If you work in the automotive industry, you likely feel particularly overwhelmed by what the next few months may have in store, and everything you've been through in the last few behind us, while the world is desperately seeking a clear pathway out of this mess. During times like these, it’s important to unplug from the news of gloom and doom, and look to great leaders who powered through adversity during dark and challenging times, like Henry Ford.

Ford was a once-in-a-lifetime businessman who had a way of reshaping the conventional way of thinking into a more forward-thinking approach than had been seen in the business world previously. He was not the type of person to sit idly by or simply hoped things got easier. Instead, he was a man who turned hardship into opportunity.

Although some have followed in his footsteps, many consider Henry Ford to be the first truly innovative businessman to turn conventional thinking on its head. With an unmatched influence on the automotive world, Ford’s mindset is an excellent inspiration to get into during these challenging times.

Following are 20 quotes to put automotive industry professionals and hobbyists like you into the Henry Ford mindset while preparing to conquer seemingly insurmountable challenges:

"There is only one rule for the industrialist and that is: make the best quality goods possible at the lowest cost possible, paying the highest wages possible." - Henry Ford

“Thinking is the hardest work there is, which is probably the reason so few engage in it." - Henry Ford

"Employers only handle the money – it is the customer who pays the wages." - Henry Ford

"A business that makes nothing but money is a poor business." - Henry Ford

"To teach that a comparatively few men are responsible for the greatest forward steps of mankind is the worst sort of nonsense." - Henry Ford

"Obstacles are those frightful things that you see when you take your eyes off your goal." - Henry Ford

"It is not usual to speak of an employee as a partner, and yet what else is he?" - Henry Ford

"The only real mistake is the one from which we learn nothing." - Henry Ford

"Quality means doing it right when no one is looking." - Henry Ford

"If you had asked people what they wanted, they would have said a faster horse." - Henry Ford

“The whole secret of a successful life is to find out what is one's destiny to do, and then do it.” - Henry Ford

"Before everything else, getting ready is the secret of success." - Henry Ford

"Experience is the thing of supreme value." - Henry Ford

"It is observed that successful people get ahead in the time that other people waste." - Henry Ford

"That the devil finds work for idle hands to do is probably true. But there is a profound difference between leisure and idleness." - Henry Ford

"When everything seems to be going against you, remember that the airplane takes off against the wind, not with it." - Henry Ford

Did you find something in these quotes to inspire you today? Let us know which ones you found the most inspirational in the comments below.