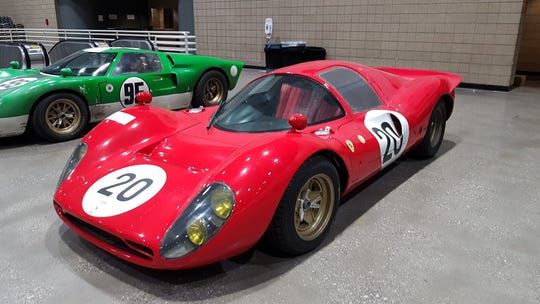 These cars will tour Kansas City, the Windy City and the Motor City.

Detroit's Autorama is one of the most prestigious custom car and hot shows in the U.S., but this year's show will feature two very special racecars. A Ford GT40 and Ferrari P330 that were used in the filming of Ford v Ferrari will be on display at Autorama as well as car events in Kansas City and Chicago. This three-city tour of the Midwest kicks off this weekend at the 60th-annual World of Wheels Kansas City.

The Ford GT40 is by far the highlight of this movie as it was the car developed for the sole purpose of beating Ferrari in the 1966 24 Hours of Le Mans. According to the Detroit Free Press, this GT40 wearing the no. 95 is apparently the real deal with claims this car is "an original race car" that is "owned by the studio," but that's highly unlikely as the GT40s are extremely rare and very expensive. It looks very similar to the 1966 GT40 on display at Volo Auto Museum, which was also claimed to be in the movie wearing various colors including this green-and-white Holman and Moody livery.

You can't have a Ford v Ferrari display without a Ferrari, and attendees to these World Of Wheels and Autorama event will also get to see a Ferrari P330 used in the film. This car is a replica wearing the no. 20 on its hood and doors, and event organizers say that this Ferrari is on loan from a private collector who also lives in the Midwest.

It's currently at World Of Wheels Kansas City before heading to the Detroit Autorama that runs from February 28 through March 1. Finally, the cars will end up at the World of Wheels Chicago, which takes place March 6-8.