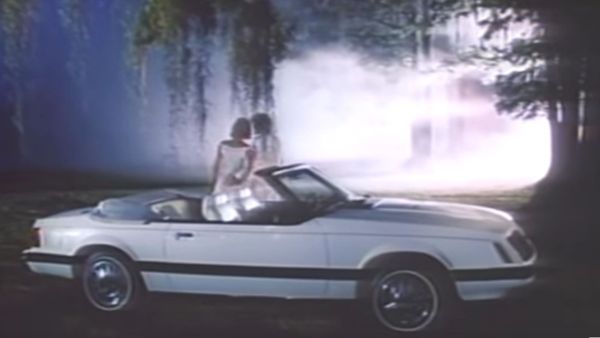 Relive a time when Ford decided to go cheesy 80s to advertise its pony car.

If you still watch TV or online videos, you’ve probably seen a Ford commercial lately. Like other car ads they’re slick, well-tailored, and pretty boring. Back in 1984 the Blue Oval had a completely different approach to advertising its beloved pony car. It involved cheesy jingles, women with crimped hair blowing around, and lots of random excitement. In other words, they were nothing like muscle car commercials today.

We’ll start with perhaps the most interesting commercial featuring the 1984 Ford Mustang Convertible. It’s a romantic TV spot with a country ballad and a young woman in a white dress waiting for her special man in his special pony car to arrive. Why the car is even white, so you could say the guy rides in on a white horse. Plus, he’s of course wearing a white suit. This was all very fashionable back in the day, trust me younger readers. Watch the video to get the full effect, especially the crystal wind chimes and owl shots – they’re classic.

The other two commercials start out with a woman flipping her crimped hair around while staring intensely at the camera while vocalists sing “Mustang!” You see the same woman behind the wheel of a red convertible ’84 Mustang, first putting the top down, then battling to keep her hair out of her face.

In these commercials we get to see the Mustang GT and Mustang SVO featured. The one below launches into what’s called “Mustang attitude.” It’s not really well-defined, but it might be what you talk about when your pony has been castrated by fuel economy and vehicle emissions regulations. Also interesting, the announcer calls the Mustang GT “the boss.” Fans of the Mustang Boss 302 and 429 probably weren’t too pleased with that.

Some will look back on these TV spots with fondness, while GM and Mopar fans will mock them endlessly. The only thing left to ask is have you driven a Ford lately? Because if not, these commercials might or might not make you want to. Leave a comment below and let us know what you think.