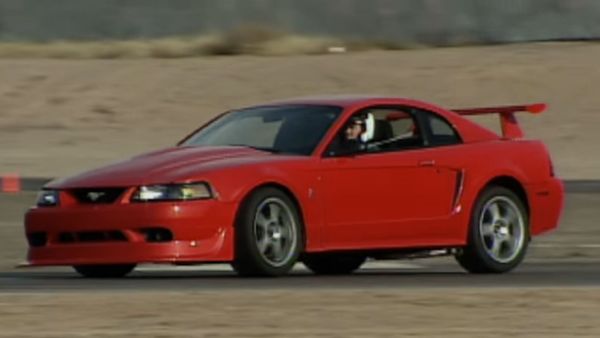 Take a trip back to when 385-horsepwoer made this a bad little pony.

The muscle car wars never truly stopped, despite some people thinking they fizzed out in the early 1970s. Case in point, the old MotorWeek review of the 2000 Ford Mustang Cobra R. While some people were worrying about a computer meltdown when all the numbers changed, Ford’s Special Vehicle Team decided to kick the Chevy Camaro SS in the teeth. This back-and-forth between the Mustang and Camaro has been going on since 1967.

Remember this car was made when the rift between Ford and Shelby was still a thing. Yes, the Blue Oval was still using the Cobra name, one of the sore sports made publicly known, and this one was created specifically for track use. That’s why the Cobra R has that big rear wing, protruding front splitter, side-exit exhaust, etc.

Besides the 385-hp on tap, thanks to a 5.4-liter V8, one of the most mesmerizing things about this pony back when it debuted was the independent rear suspension. It was a big deal and helped the Ford Mustang Cobra R hug the track while whipping around turns, something other Mustangs weren’t quite so good at. Today this feature isn’t a huge deal for a Mustang to have, but back then only the SVT models had such a thing.

Even today, the Cobra R is coveted by a surprising number of fans. That’s in part because of the wild looks and boundary-pushing performance for the time, and in part because SVT only made 300 of these bad little ponies. Most New Edge models are looked at with disdain by collectors, something which reflects in their market prices.

Back when it debuted, the Cobra R had an MSRP of $54,995. If you’re thinking these cars have just soared in value, you’d be wrong. For example, one crossed the block at Barrett-Jackson Palm Beach 2019 and sold for $60,500. It wasn’t a high-mileage example, either, with just 1,100 miles on the clock. The likelihood values will rise in the future is pretty good, so if you can find one in cherry condition it could be a profitable long-term investment.