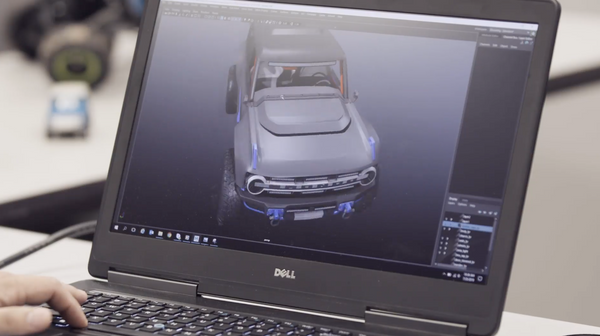 Sometimes when a project is thrown your way out of the blue with little notice and with a short timeline to get it done, you just roll with the punches. Paul Wraith, Bronco chief designer for Ford, took on the task of designing the all-new Bronco and Baja-ready Bronco R on a somewhat short notice. Of course, say "yes" to the project and then wonder how you're going to get it done afterward while brainstorming with a bunch of talented people inside the Product Development Center at the Blue Oval headquarters.

In the video posted by Ford Performance on Facebook, Wraith says that the timeline to get this Bronco R project done from start to finish was approximately three months. That is not a whole lot of time considering the amount of thought, data generating, and work that goes into developing and creating such a legend.

"We have a super high-end development process. It's super high-end. It's super disciplined, and it works at very, very high levels of tolerance, but here's an environment where we're in Michigan (Detroit), and our builder is out in Arizona," Wraith explains. "We've met once face-to-face."

At one point Wraith asked the builder about information regarding the light bar for the new Bronco, and 20 minutes later he received a photograph of the builder inside the workshop with a light bar on the ground and a ruler measuring the cord length on the curved element. Although basic, it was enough for everyone to continue on. So, despite logistics and being under immense pressure of a time crunch, everything worked out.

"This is, again, not the sort of thing we normally do, but when you're trying to move really fast and trying to make the right the decisions as quickly as you can, but decisions that you can stick to, those are sort of the approaches that we take," Wraith explains regarding the fast decision-making process that takes place when given a large project with a fairly short deadline.

With this all-new Bronco, they wanted to take the vehicle as it was and apply the design, but it would be too retrospective. They wanted to bring a fresh face to it along with a sense of dynamism.

Designing the Bronco was incredibly top-secret and out of the normal system which Wraith describes as the feeling of being naughty. "As soon as you get designers that think they're doing something a bit naughty, then you start getting really cool ideas and progressive thinking," Wraith says. "You just need the right group of people with the right thought and the right space."

With that said, it appears that Wraith and the design team at Ford seriously nailed the design for the 2021 Ford Bronco and Bronco R. We can't wait to see our first one out on the streets and tackling those trails.