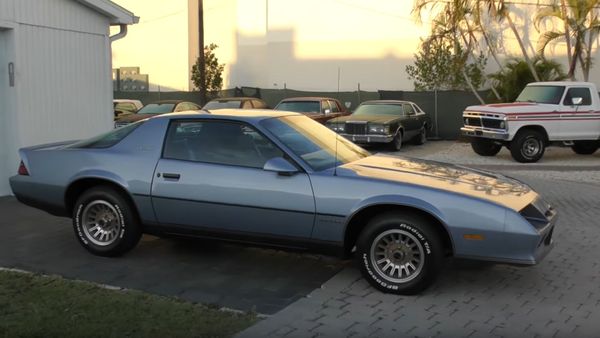 This was a car ahead of its time and now long forgotten.

You might be old enough to remember when the third-generation Chevy Camaro Berlinettas were still being made, which began in 1979 and ran through 1986. What you might have forgotten about was the “Starship” Camaros Chevrolet made for 1984 to 1986. Well ahead of its time, you can see the features of the muscle car on full display in the video below.

As the reviewer points out, the Berlinetta versions of the Camaro were somewhat luxurious and more sophisticated, at least compared to the Z-28 and IROC-Z. They came with a more optioned-up interior, however they were never huge sales successes because people would just opt for a BMW 3 Series or Mazda RX-7 instead.

People have pretty much forgotten about the Berlinettas, including the Starship models. Once you get inside and turn that ignition key, you immediately understand why this wasn’t your average Camaro but instead was almost like a spaceship for the mid-80s. It has a part digital dash, control pods for things like the turn signals and headlights, and a futuristic radio face which swivels side to side. Oh, and those control pods slide in and out, so you can position them how you like. On the roof are more controls made to be like what you find in aircrafts, plus a map light just like what you probably used on your last nighttime flight. The interior controls were very advanced for 1984.

Another important point: how is this Starship Camaro in the video in almost like-new condition? Just like the guy notes, 80s GM build quality was notoriously cheap, so someone obviously was rubbing Meguiar’s protectant all over the hard plastics and door/window seals on this car twice a week for decades.

If you don’t want to hear a long, rambling rant not related to Chevy Camaros, skip to 5:20 in the video.

The guy doing these videos is a real character. Obviously, he’s pretty abrasive and likes to engage with the trolls in the comments, plus he’s complaining about some noisy birds on his car lot while filming the Camaro Berlinetta. Then he launches into complaints about another company offering to help with his site, which if you look at really does need some serious help. It just adds to the overall entertainment factor of the video, although we’re not sure if buying a car from him might push someone over the edge or not.