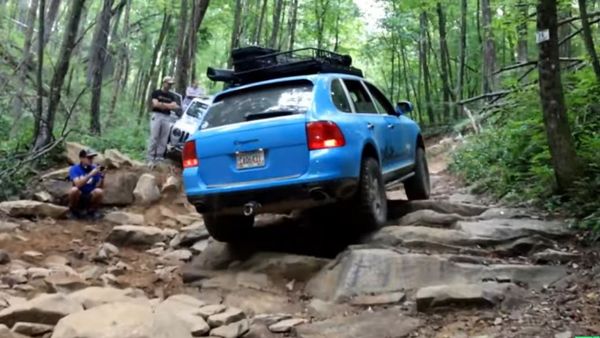 Don’t hate on the Porsche just because it’s expensive.

To a certain group of people, even car enthusiasts, the idea of taking a Porsche Cayenne on hardcore trails sounds like the dumbest idea ever. However, in the video included with this article, Bryson Richards tells of his experience building a Porsche Cayenne that’s not only off-road ready but is able to duke it out in some pretty rugged competitions. If that sounds ridiculous to you, it’s time to open your mind and learn something new.

I remember how long ago saying something to a group of people about how the Porsche Cayenne Transsyberia was a fantasy off-road vehicle of mine. The hate was immediate and harsh, because “everyone knows” only Jeeps are good at managing hardcore trails. In other parts of the world, it’s only Land Cruisers or Land Rovers, funny enough. It’s that narrow-minded viewpoint I’ve snickered at since, yet it’s far more widespread than you might believe.

It’s almost like these people haven’t heard of a Safari 911 before. Actually, I’m pretty sure they haven’t, yet they know “everything” about cars and off-roading. Funny enough, Richards has a similar knee-jerk reaction when someone brought up the idea to him at first, but the guy was smart enough to do some research.

However, this Cayenne was first built to be a support truck for the competition vehicles. That makes sense since it has more interior space for hauling parts and supplies. He knew he wasn’t building a rock crawler and wisely so, because that’s not what a Cayenne would excel at. But that doesn’t’ mean it can’t take on some reasonably technical trails, because as you’ll see in the video it can with relative ease.

Richards’ Cayenne has become somewhat of a legend in the off-road community. In fact, Richards says it’s won over some of the Jeep guys, which is a pretty amazing feat. Just remember, this is an off-roader of a different sort, so you can’t stack it up against a Wrangler with 37-inch tires.

Check out the video and form an opinion of your own.