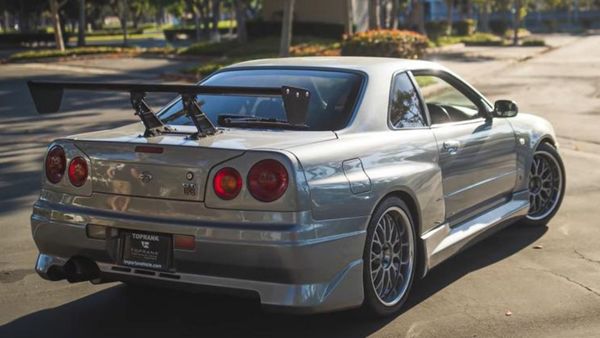 This is the Fast and Furious star’s personal Godzilla.

Even before he died tragically, Paul Walker was an icon in the automotive world. He was one of the stars of the most successful car-themed movie franchise of all time, The Fast and Furious, plus the man was an active member of the enthusiast community in Southern California. The fact the man died suddenly as a passenger in a Porsche Carrera GT which lost control and burst into flames has on heightened attention about anything attached to him, especially Walker’s cars. We’ve seen quite a few of the vehicles from his massive collection in person and it’s obvious he cared greatly for them. However, Paul Walker’s Nissan Skyline GT-R R34 is absolutely legendary.

In the video attached to this post, Larry Chen of Hoonigan AutoFocus gets to tour Toprank importers, a shop in California which is just loaded with Nissan Skyline GT-Rs as well as other imports like Toyota Supras, Acura NSXs, etc. This guy gets to see and even drive all the cool cars and we’re definitely jealous.

You have to admit, Paul Walker’s R34 Skyline GT-R has some nice appointments. There’s a carbon-fiber hood and rear wing, which pair nicely with the gray paint. Under the hood is a nice assortment of bolt-ons like a carbon fiber strut tower brace, HKS turbo system, etc.

If you’re salivating right now, know that Toprank is looking to sell Paul Walker’s R34. They’re not exactly sure how they’re going to do it, but if you’re interested it wouldn’t be a bad idea to drop them a line. Just make sure you have plenty of financing, because this car won’t go for cheap, that’s for sure.

There’s been a fairly popular rumor circulating around for some time that Paul Walker’s personal R34 Skyline GT-R was in 2 Fast 2 Furious, but it isn’t true. In fact, the car you see in that movie belonged to Craig Lieberman, who was working as the technical advisor for the movie. Now that the record’s straight, it’s great to see what no doubt was one of Walker’s most beloved cars.