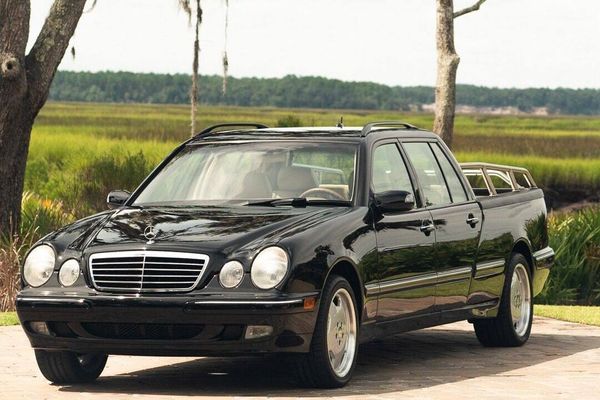 Have you ever wondered what would happen if Mercedes-Benz built something like the Honda Ridgeline about 20 years ago? We can't say we have, either.

Fans of older Mercedes-Benz models often cite their rugged durability and reliability as a major reason why they love them. Someone took that rugged theme a step further with this wild custom creation.

While browsing Facebook Marketplace for weird cars (we love our job sometimes), we hit the mother lode. We found this 2000 Mercedes-Benz E320 offered for sale at a dealer in Tifton, Georgia.

You've probably already noticed that this isn't your average E Class. For most, a station wagon would be more than enough extra utility to handle day to day errands. For the dealer that commissioned this thing, that simply wasn't enough.

The trunk/hatch area of this E320 was replaced by a respectably large (by, say, El Camino standards) pickup bed, and the entire creation sits atop a stretched chassis. According to the listing, it was custom built in Germany for a Mercedes-Benz dealer in Atlanta, Georgia.

It started life as a station wagon (estate) model, before being sent to Binz Karosserie. There, 29 inches – over two and a half feet – were added to the car's overall length. The conversion apparently cost in the neighborhood of $50,000 back in 2000.

Once it was stateside, it was used for promotion by the dealer before being sold into private hands. With just under 23,000, it still looks more or less like a new car, albeit a very unusual one.

If you want to add this unusual Mercedes-Benz to your collection, or you are an independent shop that specializes in German cars, you can now own this one-of-a-kind E Class for just under $60,000. It'd make for a perfect parts chaser for you other projects.