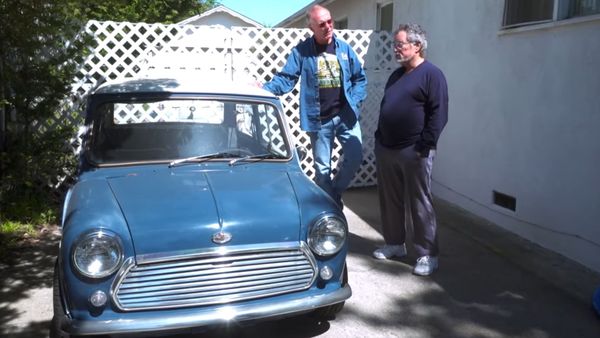 This is quite the tale…

Tom Cotter of Barn Find Hunter fame knows a lot of people. To track down vehicles, the man has to have a good network of people who like him, so he no doubt likes to keep his contacts warm by touching base and talking cars as often as he can. We see him do just that in this latest episode and in the process are treated to an interesting story of a man reunited with his long-lost, beloved car.

Tim Considine lives in Los Angeles and like a fair number of residents has an entertainment industry background. The man has acted in many things, including Mickey Mouse Club. The guy is also a gearhead and a writer, having done books and magazine articles, so he knows his stuff.

One of the first questions Tom always asks people when he checks out one of their classic cars is why they bought it. Tim said he thought it was something fun to drive which wouldn’t attract much attention, but apparently it did just the opposite. After all, the old Austin Mini Coopers are distinct, look fun, and have become beloved even by people who don’t really like cars

A beloved car, the 1968 Austin Mini Cooper S was in a small collision and needed work. Through a series of events which would make for a good TV show or movie, the car was taken to a shop to be fixed and then was forgotten about for 5 years. That sounds unbelievable, but you just have to watch the video and hear the whole story.

This is an interesting episode, even though it’s on the short side for Barn Find Hunter, so it’s definitely worth a few minutes of your time. You not only hear the story of the Mini but also Tom talks about taking a group of journalists to 24 Hours of Le Mans back in the day with Tim.