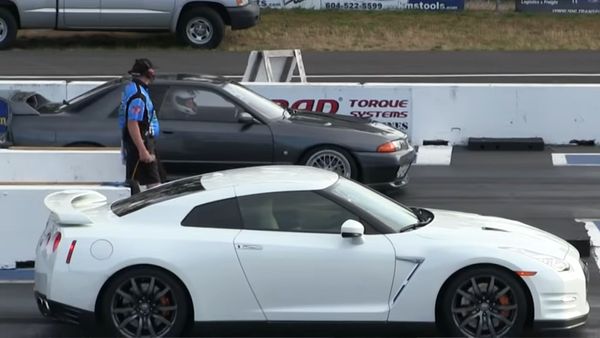 Even if you don’t know that much about Nissan Skyline GT-Rs, you probably assume like everyone else that they’ve improved over the years. And while the current R35 GT-R isn’t technically called a Skyline here, it’s obviously a descendant of the R32. That’s what makes pitting the two Godzillas against each other on the drag strip such an interesting proposition.

The obvious conclusion is that the newer Nissan GT-R is going to absolutely murder the R32. After all, it’s loaded not only with way more power out of the factory but also loads of modern technology. That’s one of the aces up the sleeve of Nissan’s supercar, the thing which allows the straight-six engine to absolutely embarrass many a V8 at the track.

However, the old school JDM crowd will quickly point out that the simplicity of design for the R32 gives it an advantage. After all, the car weighs considerably less. Everyone knows the less weight the quicker the acceleration, assuming everything else is the same. Oh, but in this matchup everything else is far from the same.

Putting another wrinkle in this competition is the obvious fact the Nissan R32 GT-R has been modified. It’s possible the R35 has been tweaked as well, although it’s not as easy to tell. With well over 2 decades to experiment, tuners have been able to eek all kinds of crazy power figures from the R32, making them tough to beat in a race. So, with the lighter curb weight and who knows how much power under the hood, the R32 is a more legitimate threat.

Obviously, you could go on theorizing which car wins, but you have to watch the video. Spoiler alert: the guy driving the R32 has horrible reflexes.

Now time to watch the video. We apologize in advance for the absolutely cringe-inducing chatter from the announcers are the beginning of the video. Just ignore those morons and enjoy the race.