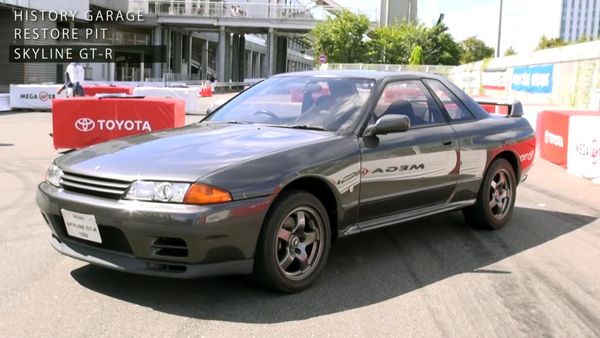 There's no hiding the fact that an automaker rarely pulls any punches when it comes to promoting its own products, but when it comes down to true automotive passion, some companies prove that enthusiasm is more than just a badge. That's why it's refreshing to see the Toyota-owned Mega Web post a video documenting the restoration of one of the most iconic Japanese cars ever made – the R32 Nissan Skyline GT-R.

In case you didn't know, Mega Web is an interactive automotive theme park in Tokyo, Japan that operated by Toyota, and among the activities available to visitors, there is an area called the History Garage. This area shows everything from motorsports history to a glimpse back at Tokyo from the 1960s, but perhaps the coolest part is the Restore Pit where people can get a first-hand look of Toyota's craftsmen restoring classic cars.

Past restorations include global automotive icons such as the 1954 Porsche 356, 1963 Chevrolet Corvette, 1954 Volkswagen Beetle, 1973 Dino 246 GTS, 1967 Jaguar E-Type Roadster and even a 1981 DeLorean DMC-12, so it isn't really all that surprising to see Toyota restore a 1989 Nissan Skyline GT-R. In the video, the R32 is meticulously disassembled including the removable of the car's driveline before the body was sent off to be repainted. Before reassembly, the restoration team even polished parts of the Nissan including the brakes and axle boots to make this car museum-ready.

According to the article from Japanese Nostalgic Car, this restoration started in early 2019 and took a little over a year to complete. The best part about the cars restored through the History Garage is that they are driven on Mega Web's onsite test track and even offer ridealongs to the public. The video description says that this 1989 Nissan Skyline GT-R is not currently on display at the museum, so isn't exactly clear when or where this Nissan will be housed.