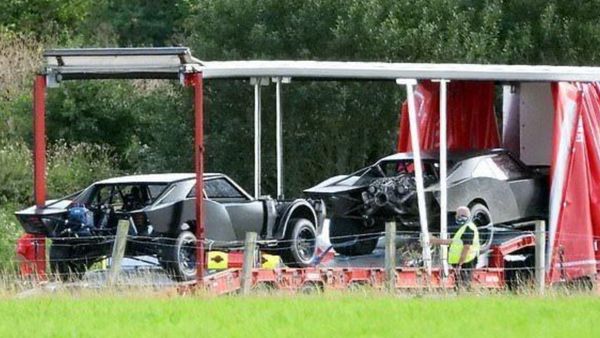 Please, make the pain go away!

We keep getting teased with reveals of the new Batmobile which will be starring in The Batman with some guy who used to be a sparkly vampire. At first we were super excited to hear the Dark Knight’s new ride would be a muscle car. Then we saw the first shadowy images and quickly realized the Batmobile wasn’t what we were hoping for. Subsequent reveals, including this latest one that’s a series of “leaked” images, confirm this film might be worthy of watching when it hits Netflix.

DCU Source took to Twitter to drop three photos of two Batmobiles being unloaded from a covered transporter. It’s likely a shot taking at one of the filming locations and we’d bet good money even though it’s been made to look covert It’s actual part of the marketing campaign for the movie. The plan is to have car sites like ours gush over how great it looks, but we think for ourselves instead of just rehashing what PR departments want us to say.

Yes, Warner Brothers wants to get all us gearheads in theater seats because we’re in awe at the mid-engined Mopar (it looks like possibly a 1969 Dodge Charger but with so many modifications that’s difficult to determine).

The thing is we’re not falling for the ploy. Maybe it’s that the Fast and Furious franchise has deadened us by increasingly ridiculous car stunts, like launching hypercars out of skyscrapers and submarine races, but this isn’t getting us the least bit worked up to see the movie. Actually, come to think of it, this is like a mix of Batman, Fast and Furious, and something else we can’t put our finger on (maybe a The Cure music video?).

To be completely clear, we’re not taking shots at Batman. But let’s face it, not all depictions of the Caped Crusader have been created equal. Focusing on the Batmobile, some people prefer the TV show version, some the Tim Burton turbine-powered car, and others the tank-like Tumbler. But we don’t expect there’s going to be a rabid camp of gearheads who’ll be gushing over this thing, just like how nobody raves about the Batmobile from Batman and Robin.

Fans of the movie they haven’t seen yet are going to be angered by our opinions, but they need to remember they’re entitled to their own. We know “movie magic” (we hope not CGI) will probably make the Batmobile look better, but there’s so much wrong with the design not even Hollywood trickery can fix it. That exposed engine is a problem waiting to happen, but we might be giving away major plot spoilers pointing that out! Between this and the leaked Batcycle with its impalement-friendly design, The Batman looks skip-worthy for sure, at least if you’re wanting to see it for the vehicles. After all, one of the main draws of Batman has always been his “wonderful toys.”