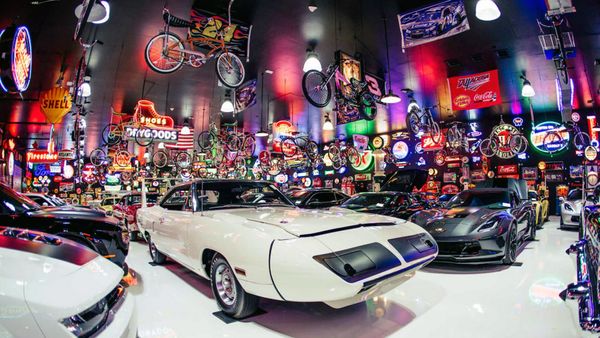 In addition to the highly collectible cars, this collection will also be the world's largest personal collection of automobilia ever auctioned to the public!

Mecum's auction of the Eddie Vannoy Collection was originally scheduled to have run from June 3-7, but due to COVID-19, this auction was postponed. Mecum just announced that this auction will no take place June 26-30 at Vannoy's estate in Jefferson, North Carolina, and it will be an incredible opportunity to bid on highly collectible cars and some of the coolest automobilia and Americana you'll find.

Eddie Vannoy is the CEO of a North Carolina-based construction company, and he has spent more than 30 years building this collection of more than 80 vehicles ranging from bone stock to restomod and from vintage collectible to modern classics. Clicking through the auction's digital catalog, every virtual page is filled with a car any collector would be happy to own whether it's an iconic muscle car like the 1969 Dodge Charger Daytona, a custom 1950 Willys Jeepster restomod or a factory-original 1995 Ford Bronco with just 457 actual miles on it!

Literally every vehicle in this collection is worthy of its own feature story, but some of the highlights include a trio of Dodge Challenger SRT Demons, a 2004 Chevrolet Corvette Daytona 500 pace car, 2008 Dodge Magnum SRT8, a pair of 1996 Corvette Grand Sports (both with under 200 actual miles) and a 2007 Ford Mustang Saleen S281 police car built as an official marketing car for the Transformers movie. Hands down, the coolest and most unique vehicle in this collection is an Art Deco-style 1941 Kenworth fire truck, which is said to be just one of five ever made and is believed to be the last surviving example.

In total, more than 5,000 items will be up for grabs from the Eddie Vannoy Collection including toys, signs and an assortment of NASCAR memorabilia such as autographed helmets from Dale Earnhardt, Richard Petty, Bill Elliott, Jimmie Johnson, Jeff Gordon and more. This is sure to be a must-attend event for any car collector.