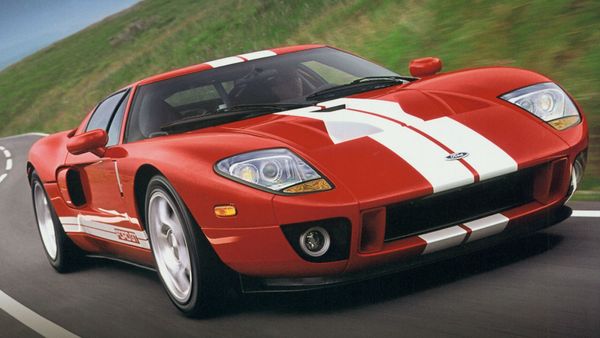 One of America’s few supercars is still inspiring today.

After 15 years, the 2005 Ford GT is still a supercar which gets enthusiasts excited. Sure, the current Ford GT MK II is a technological marvel, but it doesn’t have a snarling V8 or a look that’s quite so closely tied to the legendary Ford GT40. About that retro, throwback design, Camilo Pardo, the chief designer of the 2005 Ford GT, recently revealed how it came about.

In case you don’t remember (and how couldn’t you?) around the turn of the millennium and after was a time when retro car designs ruled supreme. Some were pretty great, like the Plymouth Prowler, while others left a little more to be desired, let’s say the Chrysler PT Cruiser. Obviously, Ford wanted its new supercar to be remembered fondly and act as a nice halo model to inspire people to buy more affordable vehicles.

First and foremost, Ford wanted the design to be closely tied to the GT40. The first sketches were drawn way back in 1999, followed by competing clay model designs. Everything was done in extreme secrecy in a facility away from the Ford design headquarters. The Blue Oval wanted the new GT supercar to be a big surprise.

Speaking of surprises, you might be shocked to learn the 2005 Ford GT was inspired not only by the GT40 but also the Ferrari 360 Modena. If you look at the two cars next to each other it’s not too difficult to see the resemblance, even if it never occurred to Ford fans before. Considering the beautiful lines on the 360 Modena, it’s not a thing to be ashamed of in the least.

When we saw the Ford GT40 Concept back in 2002, it was a pretty raw design. Sure, people really liked it, but Ford hadn’t done any engineering or aerodynamic development on the concept, so getting a production vehicle ready was going to require some reworking.

One of the big sticking points was the clamshell doors. Pardo insisted they were incorporated into the supercar’s design since they were necessary to nail “the GT40 personality.” Without those doors, that spiritual connection between the modern car and classic racer would’ve been weakened.

In the meantime, there was the issue of a powertrain. Ford’s chief engineer and head of SVT, John Coletti, as well as Carroll Shelby really wanted to throw a V10 in the Ford GT, but it wasn’t in the cards, thanks to cost and the development time such a move would’ve required. Instead, they used the best engine Ford had at the time, cast it in aluminum, them bolted a supercharger on for that extra kick.

Even though the concept was in raw form, miraculously the final production car didn’t stray too far. Maybe it was because two highly aerodynamic, well-engineered, high-performance cars were used as inspiration.

There was even some difficulty with the name of the car. The original idea was to call it the Ford GT40, making the connection between the new supercar and classic race car crystal clear. However, another company had purchased the GT40 name from Ford previously and there was a failure to hammer out an agreement for licensing. Stuck, Ford decided to simply call the car the GT. While enthusiasts know exactly what it is to this day, average people constantly think someone is referring to the Ford Mustang GT. In a funny way, the car has become a kind of test to root out those who know little about cars.

As Pardo observes, if the 2005 Ford GT hadn’t become a production vehicle, the 2017 Ford GT program might have never happened. Fortunately we have two amazing modern Ford supercars, both connected to one degree or another to the endurance racer which famously embarrassed Ferrari at Le Mans.