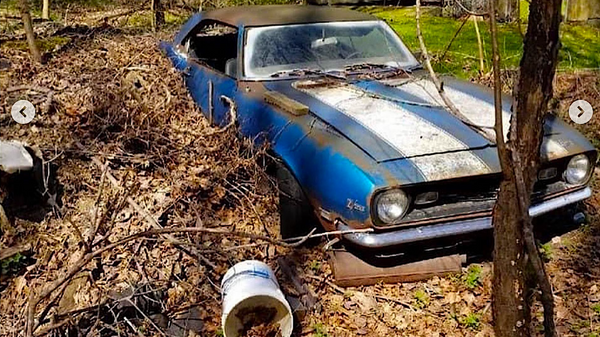 Rescued from its shallow grave, this 1968 Camaro is too rare to overlook.

Every gearhead loves a good barn find. Something you can get for cheap and restore to its former glory of dream car status. Although, it can be a bit depressing seeing the cars that we all grew up idolizing in such rough condition, there is still something great about plucking one of these classics out of its grave and giving it a second chance at life.

Labeled as “The Most Depressing Car Page on Instagram,” the Junkyardclassics Instagram page provides a stage for car enthusiasts and restorers alike to highlight many of their incredible finds. While a vast amount of the classics that are featured on the page are far beyond the point of disrepair and some have sadly been reduced to a heap of rusted and bent steel, every now and then one of these forgotten cars gets to start over. That is exactly what sets this particular abandoned 1968 Chevrolet Camaro Z/28 apart from the masses.

The Z/28 was Chevrolet’s “virtually race ready” option for the Camaro. It featured front disc brakes, a Muncie 4-speed close-ratio transmission, and a 302 cubic inch engine designed specifically for the Trans Am series races. Keeping with the racing series class regulations, the 302 was factory rated at 290 horsepower at 5300 RPM, but the high revving powerhouse actually peaked at over 6800 RPM at which it produced nearly 360 horsepower. While the underrated option was available from the very first year of production, it did not make its way into sales brochures until 1968. Only 7,199 Z/28 Camaros were produced the year that pushed this incredible option into popularity.

The low production numbers of 1968 makes this car a rare find, despite the years of neglect it has seen. According to the Instagram post, it is destined for the rotisserie where it will receive a full restoration.