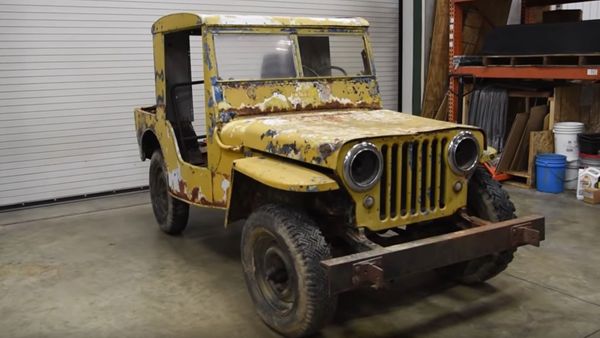 His plan is to restore it, but this is going to be a pretty extensive job.

Everyone seems to fantasize about discovering some amazing barn find car. After all, it’s almost as good or maybe even better than happening upon buried pirate treasure. Others are mesmerized by how someone could just stash something so valuable away for decades. All that fantasizing doesn’t focus so much on buying a barn find vehicle from someone else, but that’s exactly what the guy did with this Willys Jeep CJ-2A in the video below.

To call this Jeep rough would be the understatement of the year. In fact, it looks about how 2020 feels so far, if you know what I mean. The thing is pretty much a disaster right now. It gets better, because the previous owner held onto this ride for 15 years, planning to restore it with his son, but never got around to it. It’s probably a good theory that the other guy got scared.

This Jeep has rust for miles. It’s on every body panel, especially the hood where it’s doing some visible damage, and is even prominent under the hood in the engine compartment. The floor plans are rusting out. Oh, plus this Jeep has been re-skinned, so uncovering the original body won’t be easy. Most people would take one look at this vehicle and run the other direction. Would you take on a project like this? Be honest.

It gets even better: there’s some sketchy wiring in this rig. A very questionable-looking external resistor is kind of just suspended in the air by the engine. This guy is smart because he plans to gut all the old wiring and go with a more modern setup, noting it’s an extreme fire risk.

Then there’s the interior. When you see a bare seat frame you know a car has been through hell. At least the driver has a seat cushion. This is a half-cab, something many find weird and undesirable, but it sounds like this guy likes the quirkiness of it.