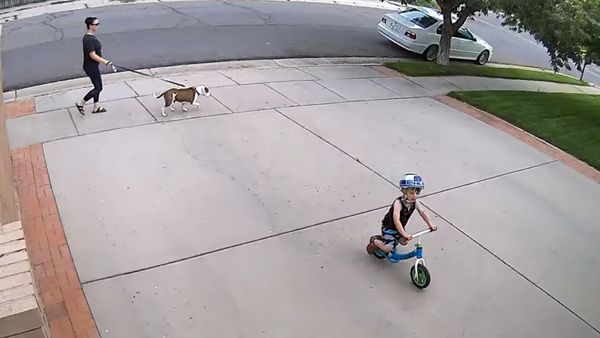 What he does next is pretty epic.

These days everyone has cameras up on their house, pointed at their front door and driveway since package thefts, car thefts, and so on seem to be all too common. Perhaps just as threatening to your beloved ride is the neighbor kids. I can distinctly remember playing basketball and completely missing the backboard (hey, I wasn’t destined for the NBA) the ball landing square on my neighbor’s pristine IROC Z. I thought I was done for because he absolutely loved that car, but thankfully the poorly-aimed basketball did no damage and my neighbor realized it was an accident. In that spirit we bring you this video of a guy who had the problem of a small neighbor boy cruising on his bicycle in the man’s driveway.

Instead of threatening legal action or just yelling like a crazed maniac, this guy did something so much better: he chalked out a racetrack on his driveway for the kid to follow. After it would rain he’d do a new design, adding rumble strips, hairpin turns, etc. Other neighbors both young and old noticed and started riding on the track with their bikes, strollers, etc. The guy could’ve been a jerk to that kid on his bike and his parents. Instead, he created something which gives a little joy to the entire neighborhood.