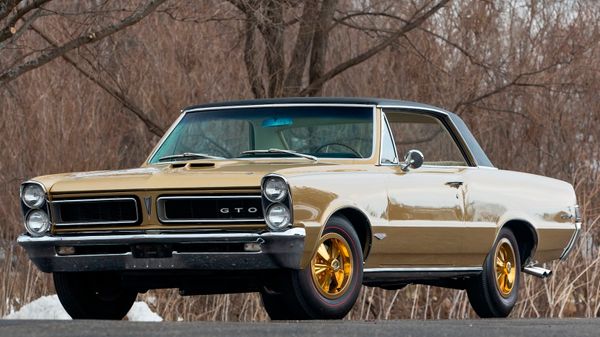 One of the most recognized and historically significant GTOs to ever exist will soon cross the auction stage.

Some may remember the popular song called the "GeeTO Tiger" recorded by The Tigers back in 1965. This album that was the basis of a unique contest in order to promote and enhance sales of the relatively new Pontiac GTO and Hurst Performance Products. A collaborative effort between Pontiac's media master Jim Wangers "Godfather of the GTO", George Hurst, Royal Pontiac, and Petersen Publishing, the grand prize was a a stunning 1965 Pontiac GTO painted in Hurst Gold and chockfull of factory options. Now, this exact GTO is now headed to the auction block through Mecum Indy held at the Indiana State Fairgrounds between June 23rd-28th, 2020.

The contest was promoted heavily in every car magazine imaginable at the time with full-page ads and plenty of written content, and on top of that, more than 450,000 "GeeTo Tiger" albums were distributed. To win, one had to count how many times "tiger" was sung and submit a small paragraph titled  "Why I'd like to win the original GeeTO Tiger". The winner of the contest was a 19-year-old from Wisconsin, and he was given the keys to the car personally by George Hurst at the NHRA Indy Nationals.

Blanketed in Hurst's Tiger Gold and featuring a black vinyl roof, this unique Pontiac GTO was stuffed with a 389-cubic-inch V8 engine with an output of 360-horsepower. A 4-speed manual transmission connected to a gold-plated shifter sent power down to the rear  On top of that, the car was chockfull of other factory options. Behind the doors is a gorgeous interior complete with contrasting white leather upholstery that perfectly complements its gold exterior.

During the span of 55 years, the car switched hands a few different times. It received work over the years including a rebuilt engine by the third owner. In 1982, the fourth owner of the car had it repainted. After a long 22 years, car collector and author Colin Comer took ownership of the GTO where it was joined by the 1965 Hurst/Motor Trend Magazine Riverside 500 GTO Pace Car a year later, also purchased by Comer. The two cars were eventually sold together to another collector in Minnesota, Bob Marvin, where they resided for about 10 years before ending up with Dana Mecum.

Besides from the repaint and the rebuilt engine by the two different owners, the car remains in its all-original form. Even better, the gold GTO has accumulated just 59,000 miles on the odometer over a lifespan of 55 years. Even more, this car made appearances in countless books and magazines, and it was even given air time during Spike TV's "Musclecar" television show in a road-test episode. Even a reproduction limited-edition model of the car came to life in the mid-2000s by Performance Years Enterprises.

So, if anyone is interested in owning a famous GTO with a rich history, make sure to pay attention to Mecum Indy next month as it crosses the auction block between  June 23rd and the 28that the Indiana State Fairgrounds.