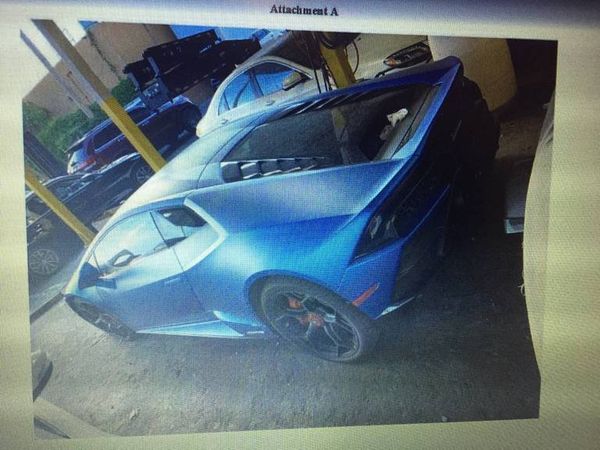 Many people are just trying to keep afloat during COVID, but some are finding new ways to scam.

When the government announced a $650 billion COVID-19 relief plan, it was only a matter of time before the scammers came out of the woodwork to abuse the system. We already heard of a Detroit man who misused $590,000 that he had secured from the Coronavirus Aid, Relief, and Economic Security (CARES) Act, and now a Miami man has been arrested and charged with fraudulently taking almost $4 million worth of relief funds.

David T. Hines, 29, was arrested and charged with obtaining $3.9 million from the Paycheck Protection Program, which he then used the money to go on a shopping spree at resorts and retailers in Miami Beach including the acquisition of a blue 2020 Lamborghini Huracán Evo (pictured here) that he had registered jointly in the name of one of his businesses. According to the U.S. Department of Justice, the $318,000 sports car was seized along with $3.4 million in cash.

The Paycheck Protection Program was created to provide small businesses with the resources needed to maintain their payroll, hire back employees who may have been laid off and cover additional day-to-day expenses. Hines, who reportedly owns several moving companies, fraudulently applied for more than $13 million in relief money before receiving the $3.9 million. Not only did he lie about the number of employees he has and the payroll they earn, but the DOJ report says that Hines did not make any payroll expenses with these funds.

In a fitting twist on this story, Miami's WSVN has a video of Hines being given a $100 citation by police last week for failing to wear a mask in public, and when the news channel spoke to him he said that he felt "silly" and thought it was "hilarious" for being ticketed. Ironically, in that news interview, Hines also criticizes the disbursement of PPP funds commenting on how much of that money "went to major corporations."

Hines has been charged with bank fraud, making false statements to a financial institution and engaging in transactions in unlawful proceeds. He posted his $100,000 bond and is on electronic monitoring (house arrest) at his mother's home as he awaits his October 14th arraignment where he faces up to 70 years in prison.