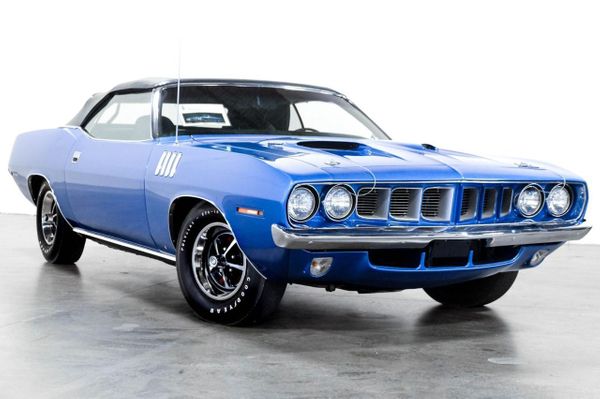 A unicorn of an American muscle car with only 5 examples built.

Former professional goaltender for the National Hockey League, Ed Belfour is known as "Eddie the Eagle" or "Crazy Eddie" by hockey fans because of his mask and skillfulness on the ice. Belfour, now 55, was inducted into the Hockey Hall of Fame back in the 2011 class. Like many sports athletes with deep pockets, Belfour has a fondness for cars and is selling a unicorn of a muscle car. That's right, his restored 1971 Plymouth Barracuda was just listed for a staggering $1.2 million.

What may seem like an insane price for a non-HEMI car, its rarity surely plays a factor considering this example is just one of five '71 Barracuda convertibles equipped with a 440 Six-Pack and a 4-speed manual transmission instead of the TorqueFlite 3-speed automatic. The power rating for cars optioned with the 440 Six-Pack is a factory 390-horsepower.

Bought back in 1987, this rare vintage 'Cuda is all numbers-matching and has been meticulously maintained. With only 54,611 actual miles on the clock, this car is listed for sale by Reserve Auto Group.

Finished in a factory True Blue Metallic with a power convertible top in black over a black vinyl and leather interior, this old-school gem was given a top-notch restoration to factory specifications by Jeff at Carman Customs in Freeland, Michigan. In fact, only 10 miles have accumulated on the car since the completion of the aforementioned restoration.

"About 80% of the original build sheet is legible" is stated in the description under the for sale listing. Also stated is that "it was an above-average car with only minor rust" which was prior to its world-class restoration. Another statement under the listing is another important one, "This is probably the only all-numbers matching 4-speed '71 V-code 'Cuda convertible with a build sheet available." Sure, the car is listed for a nice chunk of change, but the value will likely retain, if not increase.

Back at auction in 2014, the most expensive Plymouth 'Cuda was a blue 4-speed car that sold for a staggering $3.5 million. That car was a HEMI-powered convertible backed by a four-speed transmission. Once belonging to Broom Hilda cartoonist Russell Meyers, after auction the car was confiscated in a drug raid where it was auctioned again for just $405,000. Another 440 Six-Pack sold this past May at Mecum Indy for approximately $1,000,050 not including the buyer's fee, and another rare 4-speed car sold privately for $1.5 million.