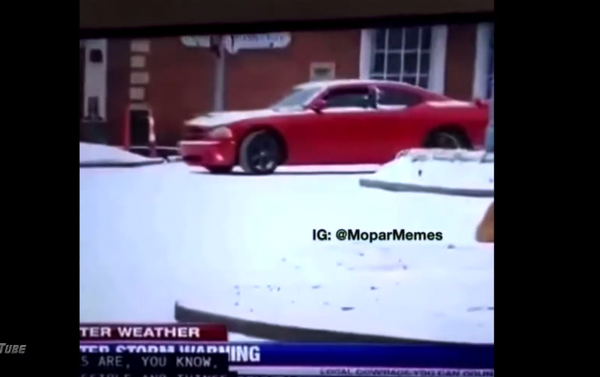 Dodge owners are notorious for being some of the rowdiest drivers in America, a 6.4-liter V8 and 475-800 horsepower allows people the freedom of having a car that is faster and more fun to drive than anything else out there. It is impossible not to have fun in one of these monsters, that hyper-responsive throttle and engine that pulls like a bat out of hell leave people with a constant smile on their face. In this particular case, the greatest personality trait of Dodge owners was showcased quite well, their wonderful sense of humor, at least when they're not getting chased by cops.

At least he didn't smack into a Tesla like this Dodge owner.

It is no surprise that Dodges, in this case, a Charger, are extremely loud when they want to be. That beautiful 6.4-liter Hemi V8 screams like a banshee leaving you with that low grumble gracing your dreams of high performance. These high-powered American V8’s are meant for going fast, and that's usually reflected in the personalities of Dodge owners. Because of this, it was made particularly funny when a local news reporter was absolutely trolled during her 'set' in the most dangerous and spectacular way possible.

It was a snowy day in Memphis, the once asphalt grey roads were now being blanketed in deep white snow. The news reporter saw the red SRT8 Charger slowly roll forward towards the corner that the reporter was reporting from. She commented that the car was going slow due to the snow and, as if on cue, the charger floored the pedal letting out the roar from two monstrous revs before slowing down again. Dumbfounded, the reporter let out a sigh and said “I guess he just wanted to say hello…” before commenting that he may have been “bowing” for Valentine's day. No lady, you got trolled.