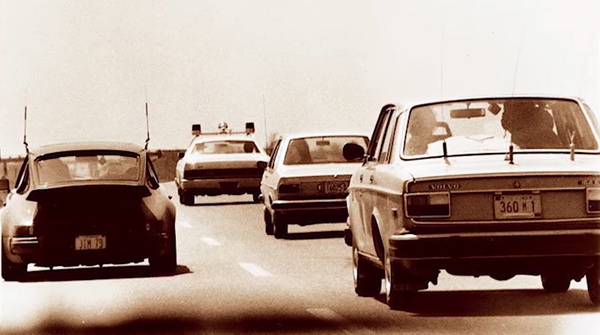 If you’ve seen or are even familiar with the classic car movie series Cannonball Run, you know about Captain Chaos. Dom DeLuise does a great job of portraying the notorious alter-ego of the otherwise meek Victor Prinzim. Anyway, it was thought for decades Captain Chaos was just a creation of the movies, but it turns out he really existed. Bill Warner explains all about it in a funny little story of the 1975 Cannonball.

Warner enjoys a lofty position in the automotive community these days as the founder and chairman of The Amelia Island Concours d’Elegance Foundation. If you don’t know about his past, it’s likely a shock to hear he was a participant in the 1975 Cannonball Baker Sea to Shining Sea Memorial Trophy Dash, the notorious race Jack May and Rick Cline won in 35 hours and 53 minutes using a Ferrari Dino. That was a world record and definitely not legal, considering their average speed was calculated at 83 mph. But there’s so much more to the story.

As for Captain Chaos, the truly shocking part is the character was based on Captain Marvel, which was Warner’s pseudonym for the competition. You’d never guess that now, and maybe you wouldn’t guess that back then, because Warner didn’t really exude the persona.

For the race, Warner was running a Porsche 911. It’s a good car for going fast, although the classic models aren’t nearly as comfortable as the ones we have today. Still, it had a 31-gallon gas tank installed and a CB radio, plus a radar detector.

Anyway, shenanigans of course followed, including Warner doing about 100 mph in the rain, just like you’d expect from Captain Chaos. Speeding was of course requisite, as were playing tricks on other cars participating in the run. All in all it was for good fun and a run which will always be remembered fondly.