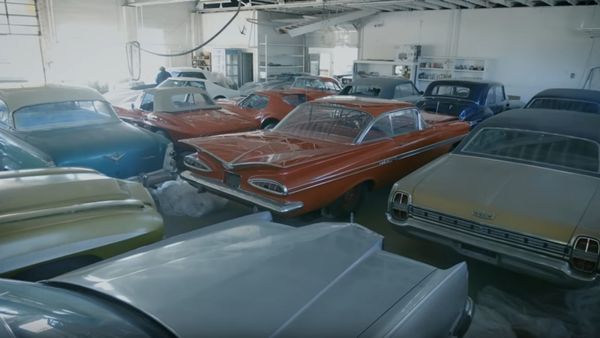 There was a lot of fanfare around this auction.

Bob Regehr, the late inventor of the Moon Walk bouncy house, amassed a collection of over 140 cars throughout his life. While many weren’t aware when he was alive that he was such a gearhead, everybody by now does. His family decided to auction off those vehicles to the public so they would be properly cared for by people who would cherish them. That move reportedly netted $2.5 million recently.

Even if they didn’t show up or place a bid remotely, many people were interested to see how the Regehr car collection did at auction.

Among the many notable cars in Regehr’s collection were over 20 different 1932 Fords, showing the man had an affinity for those perhaps above all else. In fact, a 1932 Ford B400 two-door convertible sedan auctioned for $107,910.

Out of the 140-plus in his collection, over 50 were Fords, but he had a number of GM cars as well, including 8 Corvettes from the C1 to C3 generations. A 1966 Chevrolet Corvair Coupe went for just $545, which even if that’s not your thing you have to admit is a steal. Meanwhile, a 1953 Buick Skylark Convertible grabbed $82,840 when it crossed the block.

The odd duck in his collection was a 1979 Ferrari 308 GTS Pininfarina, the only non-American vehicle. That Italian stallion went for $46,870.

Since Regehr stored his cars in a number of different buildings throughout a section of Kansas, residents were understandably excited when fleets of tow trucks descended ahead of the auction to collect them. The man was fairly secretive about his vehicles, putting them in unassuming buildings, like a shuttered laundromat, so once they emerged it was a shock.

All the transactions are being handled by VanDerBrink Auctions.