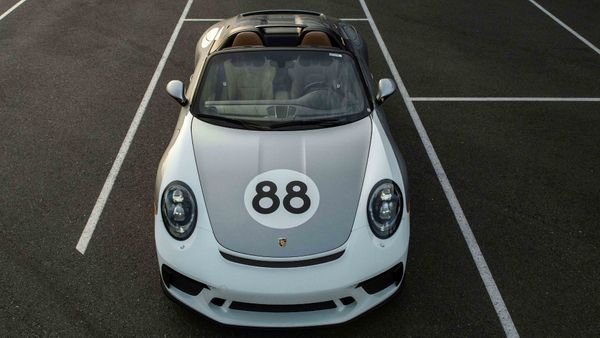 America still has plenty of fight left in it, and this proves that true.

There’s a wave of bad news about the current pandemic, so much it can easily be overwhelming. This isn’t one of those stories. Instead, we bring you a story of triumph and a push to fight COVID-19using a car. Porsche Cars North America, Inc. auctioned off the final Porsche 991 (the previous generation of the Porsche 911) and generated an amazing $500,000 to be donated to COVID-19 relief in the United States when the hammer dropped ($550,000 with the buyer’s premium. PCNA has stepped in and generously offered to match that amount, so proceeds going toward the fight are now a whopping $1,000,000.

Surely spurring the high-flying bidding, in addition to the desire to help with efforts to control the pandemic, was the fact the final 991 is an illustrious Porsche 911 Speedster. Ever since the 356, Speedster models have been some of the most sought-after Porsches on the market and it’s easy to understand why. They push the aesthetic beauty of the 911 to a new height, something even the most casual observer will notice and admire.

The identity of the winning bidder won’t remain secret for long. PCNA will be handing the car over at a special event hosted by Klaus Zellmer, CEO and President of PCNA. That person won’t just be getting the car, since it comes with extra goodies like an exclusive tour of Porsche’s engineering and design headquarters located in Weissach, Germany (once the pandemic is under control, of course), a bespoke Porsche Design watch with the 911 Speedster’s chassis number etched onto the casing, and even a single-edition book which chronicles the creation of the final Porsche 991.

The money generated by the Porsche auction will be donated to the United Way COVID-19 Fund. A significant portion of the buyer’s premium will be donated by the auction house as well. It just goes to show that even in these times of difficulty we can pull together in the car community and make a huge difference.