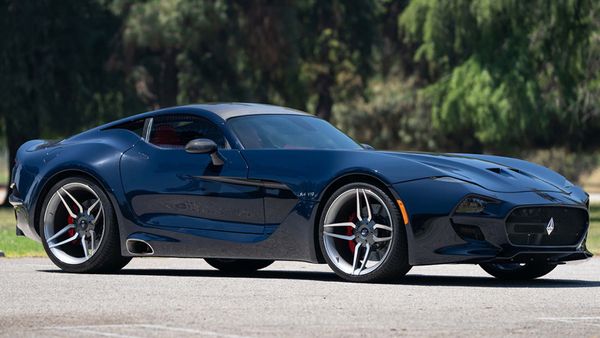 Bob Lutz and Henrik Fisker are two powerhouses in the automotive industry, so it's no surprise that when these two men created a stunning Viper-based supercar when they got together to form their own car company. What you're looking at here is a result of that company, and while only five examples of the VLF Force 1 V10 were ever made, this was the very first one.

The VLF Force 1 V10 backs up its bespoke styling in fitting style starting with the Viper's 8.4-liter V10 and six-speed manual gearbox. While a stock 2015 Dodge Viper puts out 645 horsepower, VLF Automotive squeezed an extra 100 hp from the Force 1 V10 helping this 3,395-pound supercar sprint from 0-60 in just 3.3 seconds. Needless to say, this car performs as good as it looks, and since a VLF Force 1 V10 probably won't come up for sale very often, this could be a rare chance to grab an ultra-rare American supercar.

Buying a bespoke supercar doesn't come cheap, and buying the first example of said bespoke supercar is an even pricier endeavor. As such, Gooding & Co. has this 2015 VLF Force 1 V10 listed for sale at $275,000 after the car failed to meet its reserve at auction.